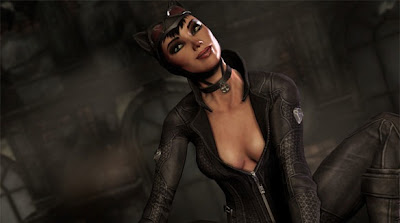 Okay, I went for an easy boob joke in the headline, but when I came across a new batch of screenshots from Batman: Arkham City—the hotly anticipated sequel to Arkham Asylum—breasts were the first thing that came to mind. Maybe it’s because Catwoman’s ample bosom is so prominently displayed in the images. It could also be the fact that the game developers at Rocksteady are seemingly determined to dress Joker henchbabe Harley Quinn in bust-enhancing fetish garb whenever possible. Not that I’m complaining, but still …