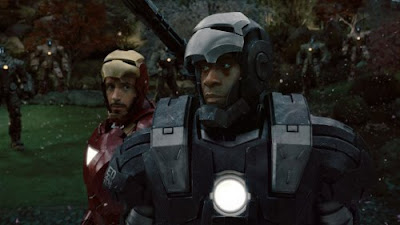 Iron Man 2—the most satisfying 2010 summer blockbuster this side of Inception—blasts its way onto DVD and Blu-ray tomorrow, Sept. 28. If you’re at all into comic books (Marvel in particular), you’ve probably seen it at least once already in theaters. Me? I saw it twice. So there.

Although I loved Iron Man 2 (hence the whole “saw it twice” thing), It pains me to say that it didn’t quite live up to the original. At times, it felt less like a true Iron Man sequel than an advertisement for future Marvel Studios films, namely Joss Whedon’s The Avengers and Joe Johnston’s Captain America. Still, in spite of its cluttered narrative, Robert Downey Jr. was perfect as Tony Stark, while the rest of the cast—including Gwyneth Paltrow, Don Cheadle, Sam Rockwell, Scarlett Johansson and Mickey Rourke—did superb jobs as well. As for the action scenes, they were suitably slick, especially the bombastic finale.

To read more about Iron Man 2, check out my review at Broken Frontier by clicking here.
Posted at 6:49 PM
Email ThisBlogThis!Share to TwitterShare to FacebookShare to Pinterest
Labels: Iron Man 2