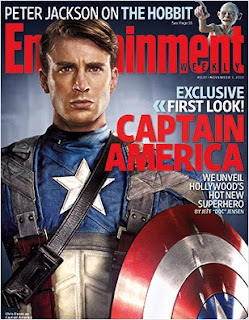 The cover of the Nov. 5 issue of Entertainment Weekly gives fans their first up-close and official look at Chris Evans as Steve Rogers in Marvel Studios’ Captain America: The First Avenger. The issue’s six-page spread on the anticipated 2011 film features a few more more never-before-seen photos of Evans as Cap in addition to a glimpse of Hugo Weaving as the villainous (pre-Red Skull) Johann Schmidt.

With his chiseled jaw and all-American haircut, the former Johnny Storm certainly looks like Cap to me, and I like that the design is a real-world revision of Cap’s comic book garb that doesn’t abandon its most recognizable elements, namely the red, white and blue color scheme, the stripes on his torso and the star on his chest. And let us not forget his legendary shield, which remains as iconic in live-action as it is on the printed page.