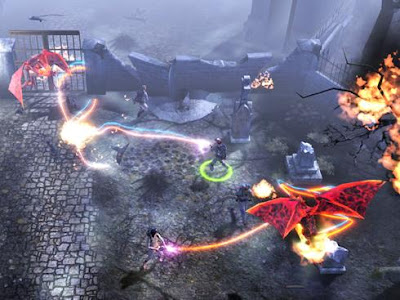 It might not be the full-fledged sequel to 2009’s Ghostbusters: The Video Game that we were hoping for, but it’ll have to do. USA Today’s Game Hunters blog revealed that Atari and Sony have teamed with developer Wanako for Sanctum of Slime, a four-player co-op game available for download in the spring for Playstation Network, Xbox Live and Windows PC Download.

Unlike the first game, which was a third-person shooter, Sanctum of Slime is a top-down adventure similar to Konami’s arcade-style downloadable game Zombie Apocalypse. Also unlike the first game, this new title will not feature the voices of original cast members Bill Murray, Dan Aykroyd, Harold Ramis and Ernie Hudson. Players will again assume the role of the mute “Rookie” Ghostbuster from the first game, who after helping the original team save New York City, was offered the opportunity to open his own Ghostbusters franchise.

Making its first appearance in Sanctum of Slime is a new vehicle called the Ecto-4WD, which players will be able to drive. The USA Today piece notes that this is the first time we’ll be able to get behind the wheel in a Ghostbusters title, but I distinctly remember driving the Ecto-1 in the original Nintendo game. Hooray for research!

For the full story, click here.
Posted at 12:30 PM
Email ThisBlogThis!Share to TwitterShare to FacebookShare to Pinterest
Labels: Ghostbusters, Sanctum of Slime

In this online journals, the writer has extraordinary written work aptitudes. His articles have delightfully portrayed the purposes of his intellectual prowess. In these websites, the Movie name Ghostbusters arrangement is one of my most loved film. It has an extraordinary script and story. A debt of gratitude is in order for sharing. Jillian Holtzmann Black Leather Jacket

Our Academic writing is a most popular with advance thinking. Our academic writing service comes in many forms; the following are some of the most common.
Assignment Writing UK