What the F is the FF? 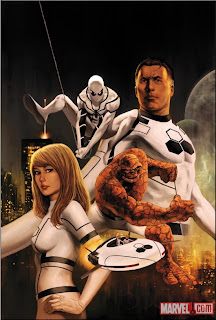 Just weeks after fans mourned the loss of the Human Torch, Marvel has announced that Spider-Man will join the surviving members of the Fantastic Four—along with some “top secret” heroes—to form the Future Foundation. What’s the Future Foundation, you might ask? Well, according to Marvel.com, their ongoing mission is as follows: “Save the Marvel Universe from its greatest threats and prevent future dangers from arising. “

Wow, Spider-Man is in another book? Between his solo gig, his Avengers membership and now this, I’m guessing ‘ol Peter Parker is feeling a bit strung out. Get it? Because…webs.

It'd be one thing if the main Spidey title(s) was actually decent. Polybag this one, Marvel.

Wish this was some "make buh-lieve!"

Yea the whole thing sounds more like a "what if the human torch died", than a real story! But i guess what can you really expect from a story like this.