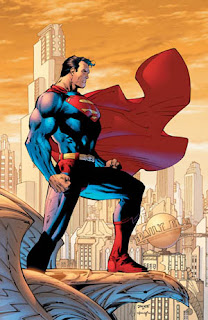 Apologies in advance for the complete and total lack of updates over the last seven days. If you know where I work, you know my life’s been crazy since Monday night. If you don’t, well, let’s just say my week has been “electrifying.” You smell what I’m cooking? Rock on.

Sports-entertainment aside, there has been a great deal of nerd news breaking online this week, including word that Warner Bros.’ faith in Superman reboot director Zack Snyder—whose previous Warner Bros. projects include the under-performing Watchmen and The Legend of the Guardians: The Owls of Ga’Hoole—has been shaken. New York Magazine’s Vulture blog reports that Snyder’s forthcoming action spectacle Sucker Punch is testing extremely poorly. One insider is quoted as saying “It was bad ; like, really bad. They’re [Warner Bros. execs] really not happy with it over there.”

This isn’t the best news for Superman fans who just recently celebrated the casting of British actor Henry Cavill as the Man of Steel. Insiders also note that the script for the unnamed reboot suffers from some devastating third-act problems, which have likely induced some studio hand-wringing as the project nears its 2013 deadline. If a Superman film isn’t in production at that point, Warner Bros. must re-license the rights to the franchise from the estates of Superman creators Jerry Siegel and Joe Shuster.