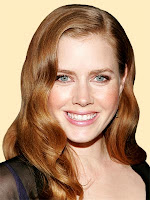 Wow, what an alliterative casting announcement!

It’s interesting that Warner Bros. has gone with a redhead to play Kal-El’s iconic raven-haired love interest, but, as noted by Snyder in a statement, Adams “has the talent to capture all of the qualities we love about Lois: smart, tough, funny, warm, ambitious and, of course, beautiful.”

Can’t argue with him there. For more on this huge casting news, visit The Hollywood Reporter.
Posted at 10:34 PM
Email ThisBlogThis!Share to TwitterShare to FacebookShare to Pinterest
Labels: Amy Adams, Superman, Zack Snyder

Amy Adams has some fantastic roles under her belt.We provide here the list of amy adams new movies She's played Lois Lane in the recent Superman movies, a real-life Disney Princess in Enchanted, and aviation legend Amelia Earhart in Night at the Museum 2. We also loved her in The Fighter — heck, she's even worked with the Muppets! Arguably one of Hollywood's most underrated actresses, with a wealth of experience in many genres of movies, she's still not managed to get herself an Oscar. Well, with her new movies and TV project, I can only hope Adams gets the recognition she deserves.So to help keep you on top of this talented lady‘s anticipated new movie releases, we've made a handy list of the next Amy Adams films and tv shows. Let's check them out! Source