Chewbacca Set to Appear on the Season Three Finale of 'Star Wars: The Clone Wars' 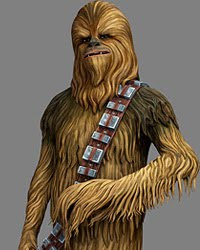 Based on all of the familiar faces that keep popping up in Cartoon Network’s Star Wars: The Clone Wars, that galaxy far, far away might not be as expansive as we once believed. Lucasfilm has revealed that everyone’s favorite loveable Wookiee Chewbacca will appear in the season three finale of The Clone Wars, helping Anakin Skywalker’s padawan Ahsoka Tano escape from the scaly clutches of some Trandoshan hunters on a planetary game preserve.

The series’ supervising director Dave Filoni told Yahoo! Movies that the two-part finale is some of his team’s best work yet, largely due to the involvement of the live-action Chewbacca himself, Peter Mayhew. The towering actor advised the animators on the movement, posture and mannerisms of the character during the episodes’ production. “We couldn’t have done it without him; it just wouldn’t have been Chewie,” Filoni said.

Having had the chance to meet Mayhew at New York Comic Con back in 2009, I’m glad to see him still involved with the saga. However, Chewbacca’s forced inclusion in Revenge of the Sith was more distracting than anything, and his debut on The Clone Wars seems equally motivated by the desire to sell new Chewbacca merchandise. Star Wars? Driven by toy sales? A shocking revelation, I know.

The season three finale of Star Wars: The Clone Wars airs April 1 at 8 p.m. on Cartoon Network. Watch a brief clip from the episode below.

Posted at 1:30 AM
Email ThisBlogThis!Share to TwitterShare to FacebookShare to Pinterest
Labels: Chewbacca, Dave Filoni, Star Wars, The Clone Wars