According to the accompanying write-up on EW.com, this new look for DC’s iconic Amazon, the costume de-emphasizes the original character patriotism and ramps up “the comic’s Greek mythology.” If David E. Kelley’s pilot is picked up, this series will evidently “offer a serious, non-campy take on the DC Comics character.”

Wait, what? If anything, this PVC costume screams camp, as does the plot that positions Diana as an executive for a company called…wait for it…Themyscira Industries. Her adversary is played by Elizabeth Hurley, who heads a pharmaceutical company producing a drug that makes people stronger. Serious.

I get that the showrunners are trying to follow Jim Lee’s recent changes to Wonder Woman’s traditional swimsuit-inspired garb, but I don’t want to live in a world where Wonder Woman wears pants. 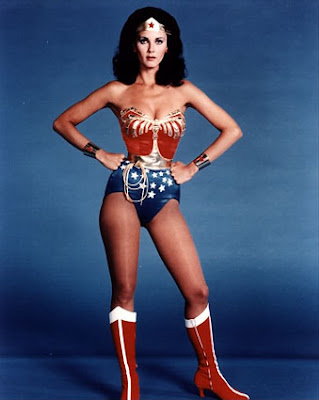