Has Julie Taymor Left ‘Spider-Man: Turn Off the Dark?’ 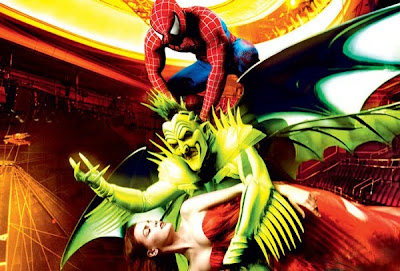 “Taymor is out. She’s left the building” an anonymous source told the newspaper. At this time, it’s not yet clear whether she quit or was fired. In any event, she’ll finally have the free time to read some of those Spider-Man comic books she’s heard so much about.

While the show was scheduled to open on March 15, its producers’ plan to overhaul the $65 million production will push the opening back yet again to June.

It looks like the people behind Turn Off the Dark are determined to salvage whatever they can. But is this Broadway debacle really worth saving? After all of the cast injuries, technical issues and brutal critical thrashings, does anyone honestly think there is anything remotely redeeming about this show save for its increasingly abundant trainwreck appeal?

By my estimation, attempting to resurrect this disaster doesn’t make a lick of Spidey sense.

For the full story, click here.
Posted at 10:33 PM
Email ThisBlogThis!Share to TwitterShare to FacebookShare to Pinterest
Labels: Julie Taymor, Spider-Man, Turn Off the Dark