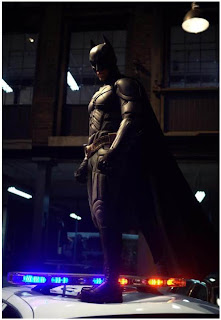 We’re still more than a year away from the release of Christopher Nolan’s The Dark Knight Rises—the film that completes his Batman trilogy—but Warner Bros. has already revealed that they are planning to “reinvent” the character in the fourth film.

“We have the third Batman, but then we’ll have to reinvent Batman…Chris Nolan and [producing partner and wife] Emma Thomas will be producing it, so it will be a conversation with them about what the next phase is,” Warner Bros. executive told the Los Angeles Times. Also on the slate is a Justice League film in 2013 in addition to Flash and Wonder Woman solo films.

I’m all for a big-screen Justice League film—especially if Warner Bros. follows Marvel Studios’ example in setting all of the other superhero films in the same universe—but it’s pretty clear that characters like Wonder Woman, Superman, Hawkman and Martian Manhunter wouldn’t make sense in the film world Nolan created. Is Warner Bros. reinventing Batman to somehow distance the character from the realism Nolan has worked so hard to retain through three movies? Is the studio deliberately taking the character back into Schumacher territory?

Furthermore, where does this summer’s Green Lantern stand in all of this? It’s hard to imagine a cinematic Justice League without Hal Jordan among its ranks.

In any event, with Green Lantern making his big screen debut, Wonder Woman returning to TV in the near future and Superman soaring back into theaters next year, it seems as though Warner Bros. and DC Entertainment are finally paying attention to the rich array of costumed characters at their disposal (that aren’t Batman). Could a Booster Gold movie trilogy be that far behind? Fingers crossed.