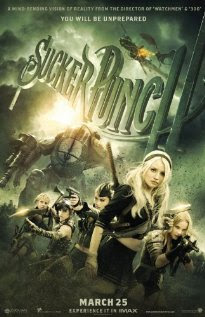 Although I saw Sucker Punch during its debut weekend—on the night of March 27 to be exact—I’ve held off on posting my definitive opinion of it. This delay is partly because of a hectic work schedule over the past few weeks, but it’s also because I frankly wasn’t even sure if I liked it or not. Yes, the visuals are astounding, which is pretty much expected from Zack Snyder (300, Watchmen) at this point. However, I feel that the core narrative robs the viewer of the opportunity to enjoy much of what they see on screen. It’s cool to watch hot chicks in lingerie fighting steam-powered zombies, orcs, dragons and robots, but when the battles exist on a plane that’s two planes of existence removed from the film’s version of reality, there’s little reason for the viewer to get excited about any of it.

Sucker Punch revolves around Baby Doll (Emily Browning), a girl who is institutionalized by her abusive father and is scheduled to be lobotomized in five days. Once she’s locked inside the confines of a mental asylum, Sucker Punch shifts to another level of reality, where the girls are instead dancers in a sleazy bordello. When Baby Doll and her fellow inmates seek out each of the five items that will grant them their liberty, the film shifts perspective yet again, taking the viewer to outlandish fantasy settings ripped straight from your favorite video games.

If all of this sounds confusing, that’s because it is. Sucker Punch is hardly the “turn-off-your-brain” popcorn flick its trailers would have you believe. As vignettes, each of the film’s battle-torn dreamscapes is a testament to Snyder’s ability to dive into the brain of the average 13-year-old male and give them exactly what they want. However, these set pieces are packaged in such a dire narrative wrapper that we’re never really able to sit back and soak up the manic spectacle.

It’s hard for me to outright recommend Sucker Punch to the average viewer, yet I do think Snyder should be commended for trying something different. The film borrows from a variety of sources—including Japanese anime, video games, comic books and several other sci-fi/fantasy films—but all of these influences are pieced together in a wholly original way. Sucker Punch isn’t a sequel, a reboot, a prequel or an adaptation, and even though it was hardly a box-office success, it takes risks in a genre that has become increasingly dependent on built-in audiences. We should appreciate that. 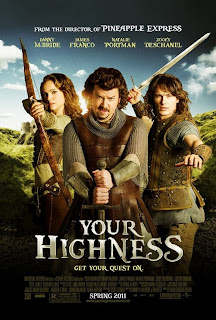 Speaking of built-in audiences, sophomoric fantasy farce Your Highness opened this weekend. A medieval take on the stoner comedy, this film was helmed by Pineapple Express director David Gordon Green, who reteams with James Franco and Danny McBride to mix swords and sorcery epics with dick and fart jokes. If you’ve seen and loved the red band (R-rated) trailers for the film, there’s no reason why you won’t enjoy Your Highness. It doesn’t approach any comedic high water marks by any means, but I think we all need some filthy, low-brow humor once in a while. I paid $11.25 for my ticket, and I feel as though I got my money’s worth.

Starring alongside Franco and McBride is the Black Swan herself, Natalie Portman, who flexes her comedic muscles once again after the surprisingly good No Strings Attached. The Oscar-winning actress is showing a lot of range as of late, and I can’t wait to see her in Marvel Studios’ Thor, which hits theaters March 6.
Posted at 7:57 PM
Email ThisBlogThis!Share to TwitterShare to FacebookShare to Pinterest
Labels: Danny McBride, James Franco, Natalie Portman, Sucker Punch, Your Highness, Zack Snyder