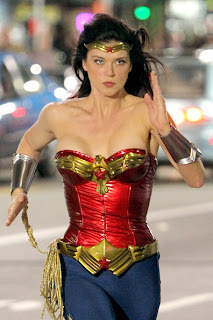 Don’t act surprised. David E. Kelley’s Wonder Woman reboot for NBC will not be going forward, reports Deadline.com’s Nikki Finke. The pilot for the series, which was set to star Friday Night Lights’ Adrianne Palicki, was not picked up by the network.

Good riddance, I say. From the hideous costume to the “reimagined” role of Diana Prince as a corporate executive, this series had failure written all over it. The character deserves better than what Kelley had in store, and I sincerely hope this series’ demise inspires Warner Bros. to refocus their efforts on a proper feature film outing for the star-spangled Amazon. As far as I’m concerned, Warner Premier’s straight-to-video Wonder Woman animated feature serves as an excellent template for how the character should be treated in live-action. Filmmakers would be wise to look to that film for inspiration.
Posted at 1:02 AM
Email ThisBlogThis!Share to TwitterShare to FacebookShare to Pinterest
Labels: Warner Premier, Wonder Woman