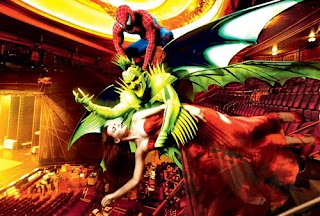 After taking a three-week hiatus for significant retooling, Spider-Man: Turn Off the Dark resumes previews this week, with producers promising that the troubled $70 million Broadway musical will now stick closer to the character’s comic book roots following the departure of previous director Julie Taymor, The New York Times reports.

According to the article, the bizarre character of Arachne—previously a villainous goddess—has been scaled back and altered drastically, becoming, in the Times’ words, Peter Parker’s “guardian angel figure.”

“In Turn Off the Dark 2.0, the myth of Arachne does not overpower the reason people are there,” Bono told the newspaper via email, “to discover what makes Peter Parker a superhero, which in the end turns out not to be his spider senses, but his personal integrity and especially his humility—something something I hope all of us in this process have learned from.”

That sounds all well and good—especially that last bit about humility in light of the show’s disastrous history—but this shiny and new iteration of Turn Off the Dark evidently features a musical number in which the Green Goblin makes fun of voicemail.

For the full story, click here.
Posted at 7:58 PM
Email ThisBlogThis!Share to TwitterShare to FacebookShare to Pinterest
Labels: Spider-Man, Turn Off the Dark