At some point in Marvel Studios’ Captain America: The First Avenger, Steve Rogers wears a ridiculous(ly awesome) version of his costume to entertain the troops as part of the USO. It’s a nod to the character’s iconic comic book appearance, and a low-res shot of Chris Evans in the getup has been making the rounds online. I stumbled across it on Topless Robot and reposted it here: 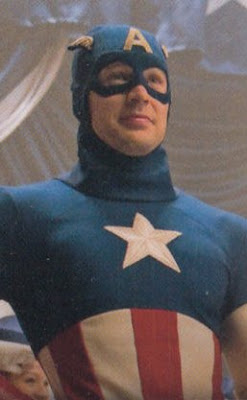 As goofy as the outfit looks, this wink to the fans offers some reassurance that director Joe Johnston and his team are approaching the World War II-era Marvel mythos with the right pulp sensibilities. Captain America hits theaters on July 22.
Posted at 9:00 PM
Email ThisBlogThis!Share to TwitterShare to FacebookShare to Pinterest
Labels: Captain America, Chris Evans