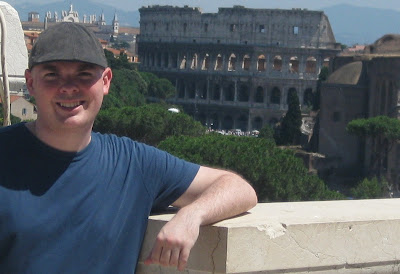 Hiya folks! I can honestly say that my trip to Italy this past week was among the greatest experiences of my life, and I’d like to extend heartfelt congratulations and thanks to newlyweds Chris and Katie Melfa. If not for their decision to do a destination wedding in Assisi, I don’t know when I would have made the journey across the Atlantic to see its awe-inspiring sights, nor would I have experienced firsthand the many wonders of Rome. That’s me pictured with one of them: the iconic Colosseum.

I’m back in the U.S., but I’m hardly slowing down. My friends Morgan Lorenzen and Heather Stradling will be getting married this weekend, and next Wednesday I venture west to Comic-Con International in San Diego on WWE-related business. After that, my longtime pal Michael Johnson ties the knot at the United States Military Academy in West Point, New York.

As you can see, I’m going to be pretty busy over the next few weeks, which essentially means any and all blogging will be kept to a minimum until August.

In the meantime, if you haven’t already, be sure to friend me on Facebook so you can check out photos from my Italian odyssey!
Posted at 8:12 PM No comments:
Email ThisBlogThis!Share to TwitterShare to FacebookShare to Pinterest

For the next week or so, I’ll be out of the country attending a wedding in Italy. As I enjoy a much-needed vacation, I’ll be mostly unplugged from Facebook, Twitter and the blogosophere. But don’t fret, Wortmaniacs! I shall return here soon enough.

Until we meet again, stay nerdy!
Posted at 11:06 PM No comments:
Email ThisBlogThis!Share to TwitterShare to FacebookShare to Pinterest

By Odin’s beard! According to The Hollywood Reporter, Disney and Marvel Studios have agreed to move forward with a sequel to Kenneth Branagh’s Thor, slated for release on July 26, 2013.

Although Branagh will reportedly not be sitting in the director’s chair this time around, he will serve as a producer. Chris Hemsworth is attached to reprise his role as the titular Asgardian God of Thunder.

I’m excited to see what’s in store for this character after the events of next summer’s Marvel team-up film, The Avengers. Hopefully, Natalie Portman also returns as Thor’s earthbound lady friend, Jane Foster.

Michael Bay Brings the Boom with ‘Transformers: Dark of the Moon’

Few films divide geeks quite like those in Michael Bay’s Transformers franchise. Upon the release of each movie, film fanatics typically find themselves in two camps: Either they laud the films for their brash evasion of complex storytelling in favor of bombastic excess and CGI smackdowns between giant robots, or they view their incredible box office success as a prime indicator of our cultural collapse.

Whatever you think about Bay or his films based on Hasbro’s robots in disguise, it’s impossible to ignore the fact that Transformers: Dark of the Moon is poised to be one of the biggest releases in 2011. However, after the lackluster Transformers: Revenge of the Fallen, is this third installment worth the hefty 3D ticket price? Read on to find out.

About that last movie …
From the opening frames of Dark of the Moon, it’s clear that Bay is sorry about how much Revenge of the Fallen sucked on a base level, and makes up for that massive misstep with a far more interesting narrative and a lot more action than its predecessor. In fact, the final hour of the film is essentially one long action sequence, as the Autobots—led by Optimus Prime—take the fight to the Decepticons as Chicago crumbles around them.

This is all well and good, but Bay simply can’t escape his tendency to transform his human characters into bizarre, eccentric caricatures. Series newcomers like Ken Jeong, John Malkovich, Alan Tudyk and Frances McDormand—playing an excessively terse U.S. National Intelligence director—are so over-the-top in their roles that they undermine the more serious portions of the film. Like when the world is ending.

The new girl
After Megan Fox compared Bay to Adolf Hitler in the press, Bay and executive producer Steven Spielberg were understandably unhappy with her, especially considering the fact that it was the original 2007 Transformers film that made her a star. With Fox out of the picture, Victoria’s Secret model Rosie Huntington-Whitely stars opposite Shia LaBeouf as Carly Spencer, Sam’s wealthy British girlfriend.

Huntington-Whitely does just fine in the role, although the circumstances of Sam’s breakup with Fox’s character, Mikaela, are a bit hackneyed at best. Plus, it’s hard to feel bad for Sam at the beginning of the film when he whines to Carly about not being able to find a job after college. Mooching off a hot rich girl doesn’t seem like such a bad gig, but I digress.

Now, I’m not sure if this has something to do with the film being shot in 3D or what, but there were certain scenes where Huntington-Whitely’s lips looked HUGE, and the size of her smackers actually fluxuates throughout the movie. I’m not alone in thinking this was ridiculous, as the audience erupted in laughter during several of her close-ups in the third act. I doubt this was the intended reaction.

The good
Because there are new toys to be made, there are several new Transformers introduced in Dark of the Moon. In addition to returning Autobots like Optimus, Bumblebee, Sideswipe and the foul-mouthed Wheelie, we meet the Wreckers, a group of brawlers bluntly described by McDormand’s character as “assholes.” We also meet a James Bond-inspired techie named Que and Wheelie’s wild-haired new buddy named Brains, who transforms into a laptop.

The most important new addition to the Autobot ranks is the aged Sentinel Prime, voiced by Star Trek icon Leonard Nimoy. Fleeing Cybertron during the planet’s cataclysmic civil war, Sentinel crash-landed an Autobot spacecraft called the Ark on the far side of Earth’s moon. Thanks to a little revisionist history, it’s the discovery of this alien ship that initiates the Space Race between the United States and the Soviet Union in the 1960s. But undiscovered inside the Ark—left dormant as Sentinel slumbered—is precious cargo that could have changed the tied of the war on Cybertron.

No stranger to the Transformers universe after voicing Galvatron in 1986’s animated Transformers: The Movie, Nimoy joins longtime Optimus voice actor Peter Cullen and Lord of the Rings/Matrix/Captain America actor Hugo Weaving (as a battle-ravaged Megatron) in lending some major nerd credibility to the film. Also, I should add that Sentinel Prime is responsible for the coolest twist in the series, and I’m sincerely happy the folks at Paramount haven’t spoiled it in their promotional materials.

The bad and the ugly
Because Dark of the Moon is all about the Decepticons’ last-ditch assault on Earth and the Autobots, we are also introduced to some new evil automatons. Joining Megatron, Starscream and Soundwave are Laserbeak—Soundwave’s pteranodon-esque henchman—the slobbering Igor and the imposing Shockwave. Using a massive worm-like monstrosity as a means of transportation as well as devastation, Shockwave is simply badass.

Cause and effect
“Okay, so the movie’s about Sam not being able to find a job and the Decepticons once again trying to kill and/or enslave the human race … how are the special effects?” I’m glad you asked. Storytelling has never quite been Bay’s forte, but the man sure does know how to blow up a city. In this case, it’s Chicago.

Enhanced by some incredible use of James Cameron’s 3D technology, Dark of the Moon looks great. The transformation sequences are better than they’ve ever been, and the action during the film’s extended climax in the Windy City wonderfully blends CGI and live action.

Also, while I’m sure this was just another example of Bay’s fetishistic fascination with military hardware, there are some cool aerial sequences toward the end of the film showcasing a group of precision skydivers wearing high-tech wingsuits. Pointless? Kinda. But these scenes are fun to watch.

More than meets the eye?
Is Transformers: Dark of the Moon all style with very little substance? Sort of, although you’ll care a lot more about what’s going on this time around thanks to the higher stakes and some genuine peril throughout. All that said, the plot is loaded with holes large enough to drive Optimus Prime through, and several potentially dramatic moments that are marred by Bay’s reluctance to portray his human characters as anything more than mugging marionettes and exposition delivery systems.

Nevertheless, the action scenes in Dark of the Moon are undeniably slick, and more than justify the higher cost of seeing the film in 3D. In terms of sheer spectacle, Bay has redeemed himself after the disappointing Revenge of the Fallen, and has delivered what is arguably his best Transformers film yet.
Posted at 5:20 PM No comments:
Email ThisBlogThis!Share to TwitterShare to FacebookShare to Pinterest
Labels: Dark of the Moon, Michael Bay, Transformers
Newer Posts Older Posts Home
Subscribe to: Posts (Atom)