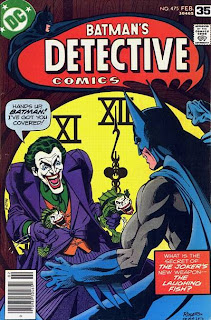 Comic book artist Jerry Robinson, credited as the creator of The Joker, died on Wednesday in Staten Island at the age of 89, The New York Times reports.

Although this is a sad day for comic book fans, it’s also a chance to honor the fact that Robinson brought to life the perfect foil to The Dark Knight, and introduced the world to a character that has thrived in every medium from comic books to animation to live-action feature films to video games. In fact, I’d say The Joker ranks right up there with Darth Vader among the best villains of all time.

For the full story, click here.
Posted at 11:46 PM
Email ThisBlogThis!Share to TwitterShare to FacebookShare to Pinterest