Patty Jenkins Drops Out of ‘Thor 2’ 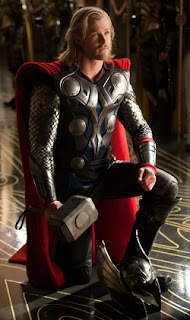 That was quick. Not long after being revealed as the out-of-nowhere director chosen to direct Marvel Studios’ Thor 2, Patty Jenkins has left the project, according to The Hollywood Reporter’s Heat Vision blog. Jenkins—who directed Charlize Theron in Monster—cited “creative differences” as the reason for her departure.

“I have had a great time working at Marvel,” Jenkins told THR. “We parted on very good terms, and I look forward to working with them again.”

After Kenneth Branagh’s surprisingly refreshing take on Marvel’s God of Thunder, I hope the studio finds a director suited to continue the character’s solo adventures beyond next summer’s Avengers team-up film. Who do you think it should be?
Posted at 6:00 PM
Email ThisBlogThis!Share to TwitterShare to FacebookShare to Pinterest