George Lucas Says ‘Nuking the Fridge’ Was His Idea 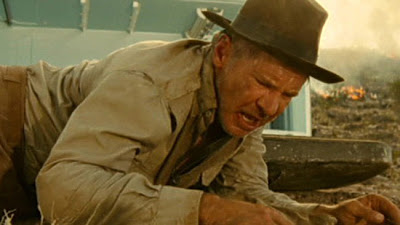 Remember how Steven Spielberg claimed full responsibility for having our favorite adventuring archeologist escape a nuclear explosion by hiding inside a refrigerator in Indiana Jones and the Kingdom of the Crystal Skull? Well, as it turns out, George Lucas is now willingly shouldering the blame for that much-criticized sequence.

In a recent New York Times profile detailing the Star Wars creator’s retirement from blockbuster filmmaking, Lucas said the questionable scene was his idea from the beginning.

“He’s trying to protect me,” Lucas said of his longtime friend and collaborator’s confession that it was his choice to “nuke the fridge.” Quite the contrary, it was Speilberg who “didn’t believe” that Indy would be able to survive the ordeal. To counter the director’s skepticism, Lucas reportedly provided a lengthy dossier detailing why the scene would make sense. Lucas affirmed that if the refrigerator was lined with lead, if Indy didn’t break his neck and if he were able to get the door open upon landing back down to earth following the explosion, there’s a chance he could survive.

“The odds of surviving that refrigerator—from from a lot of scientists—are about 50-50,” Lucas said.

Well, there you have it. For the full story, click here.
Posted at 9:07 PM
Email ThisBlogThis!Share to TwitterShare to FacebookShare to Pinterest