Max Landis presents ‘The Death and Return of Superman’

This is the most poignant and hilarious deconstruction of DC Comics’ decision to kill off (and quickly resurrect) The Man of Steel back in 1992. Enjoy! (Via darosthemovie on YouTube)

Hey, everyone. I’d love to write lengthy posts about all of the geeky goodness that has been coming our way recently, but the whirlwind that is 2012 thus far is preventing me from doing that. As such, here’s a rundown of the big nerd news that’s on my radar these days.

-Marvel Studios’ trailer for The Avengers debuted during the Super Bowl, and there was much rejoicing. Five years ago, could you have ever imagined that we’d be getting a live-action movie starring Thor, Captain America, Iron Man, The Hulk and other Marvel luminaries? Or that it would be watchable? May 4 can’t come soon enough. Check out this extended trailer, and be sure to “like” The Avengers on Facebook for exclusive content.

-A new trailer for The Amazing Spider-Man has making the rounds online (because I refuse to say it’s “on the web,”) and as much as people have been sour on the idea of rebooting the Spider-Man movie franchise just 10 years after the first installment (myself included), I don’t completely hate what Sony is doing here. In fact, I love that Peter Parker (Andrew Garfield) is a bit of a smartass when he’s in the suit, and the casting of Denis Leary as Captain Stacy is inspired to say the least. You can check out the trailer at the movie’s official site by clicking here. 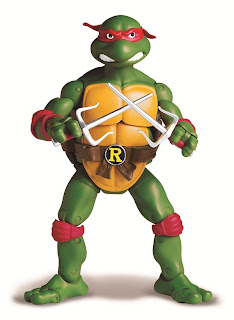 -This isn’t necessarily “news,” since most sites have commented on this already, but I can’t ignore the fact that Playmates has some incredible toys on the way for Teenage Mutant Ninja Turtles fans of all ages. The company is readying a slew of toys based on the new Nickelodeon cartoon, but what’s got me (and most children of the 1980s-turned-manchildren of the new millennium) really excited is the introduction of the TMNT Classics line. Check out the articulation on Raphael! Head over to MTV Geek for all the latest on Playmates’ entire TMNT lineup.

-Star Wars: The Phantom Menace was released in 3D this weekend, reigniting all kinds of nerdy fanboy debate (and fury) about the film and the entire prequel trilogy. I saw it last night, and while the use of 3D is impressive at times, one of the main reasons I’m not especially enthusiastic about 3D conversions is that I honestly stop noticing the 3D until I really force myself to pay attention to the depth of field. Still, Star Wars is back on the big screen, so that’s something. Oh, and if you loathe Jar Jar Binks, seeing him in three dimensions won’t alter that sentiment.

That’s it for now. Until next time, be sure to follow me on Twitter for more nuggets of nerd from James Wortman… now in a convenient travel size!
Posted at 3:02 PM 1 comment:
Email ThisBlogThis!Share to TwitterShare to FacebookShare to Pinterest
Newer Posts Older Posts Home
Subscribe to: Posts (Atom)