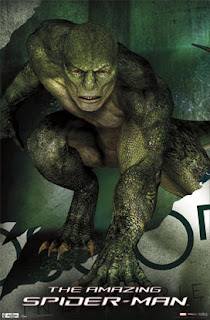 As conflicted as I was initially when I learned that Sony would be rebooting the Spider-Man movie franchise with The Amazing Spider-Man – hitting theaters on July 3 – I’m actually giving it the benefit of the doubt as its release date approaches. The trailers have been surprisingly good, and I honestly think Andrew Garfield will do a great job as the Wallcrawler based on what we’ve seen thus far.

I’m also shocked how much I like this promotional image of the Lizard that’s been making the rounds online recently. I know we’re all accustomed to the fanged and drooling Lizard that Todd McFarlane made famous in the late 1980s and early 1990s, but this design harkens back to the art of character co-creator Steve Ditko and I dig that.

What do you think? Sound off in the comments section below, or feel free to weigh in on Twitter using the hashtag #WortReport.
Posted at 1:56 AM No comments:
Email ThisBlogThis!Share to TwitterShare to FacebookShare to Pinterest

On Michael Bay, ‘TMNT’ and Why We Shouldn’t ‘Chill Out’ 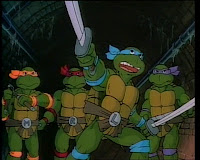 I needed something huge to drag me out of blogging semi-exile, and I think Michael Bay’s revelation that the adolescent reptiles in his forthcoming Teenage Mutant Ninja Turtles feature film won’t be mutants at all – but rather creatures from an “alien race” – is just what I needed.

To brief those of you who aren’t obsessively scouring the internet for reasons to hate on Michael Bay, here’s the skinny: During a recent Nickelodeon presentation, Bay said the Turtles in his upcoming film “are from an alien race, and they are going to be tough, edgy, funny and completely lovable.” This means that Leonardo, Michelangelo, Donatello and Raphael will come from outer space for some reason, abandoning their established origin story of being pet turtles mutated transformed by mutagenic ooze.

Fans were pissed – can you blame them?

Never one to shy away from stoking the flames of fanboy rage, Bay issued the following statement on his official website, Shoot for the Edit:

“Fans need to take a breath, and chill. They have not read the script. Our team is working closely with one of the original creators of Ninja Turtles to help expand and give a more complex back story. Relax, we are including everything that made you become fans in the first place. We are just building a richer world.”

That original creator is Peter Laird, who said that Bay’s outlandish alien plan for the Turtles “might actually work.”

“The reason I say it could be a ‘genius'’ idea is that – for the first time – someone has come up with a way to have as many freakin' Turtles as they want," Laird continued. "I mean, if the TMNT are actually members of an alien race, there could be a whole PLANET of them!”

Now, I was one of those people that defended Bay when he mucked with established character designs and story points in his original Transformers film. I thought he was altering the characters for the sake of making them more believable on film. Was I giving him too much credit? Probably. But I still enjoy the original Transformers film in spite of its narrative flaws.

That said, I refuse to chill out about Bay’s inexplicable creative decision here. This is change for the sake of change, and is proof positive that Bay really doesn’t care about this franchise or its rich pop culture legacy. Yes, I said legacy. The Turtles franchise was a phenomenon the 1980s and 1990s, and when you decide that the Turtles are aliens – thus negating the “Mutant” in their name – a LOT of people are going to notice and react accordingly.

I’m not going to say that the Turtles’ origin story isn’t untouchable. In fact, IDW’s new TMNT comic book series makes substantial changes to established canon – including the Turtles’ relationship with April O’Neil and where they came from – and it still works. Do you know why? BECAUSE THEY’RE STILL MUTANT TURTLES.

I’m usually someone that thinks we overreact about filmmakers allegedly sodomizing our childhood memories…but you know what? I’m cool with the uproar this time. Rage on, my fellow nerds.

For more on this controversy, head over to The Hollywood Reporter’s Heat Vision blog.
Posted at 11:11 AM No comments:
Email ThisBlogThis!Share to TwitterShare to FacebookShare to Pinterest
Newer Posts Older Posts Home
Subscribe to: Posts (Atom)