Peter Jackson’s ‘The Hobbit’ to be Split into Trilogy 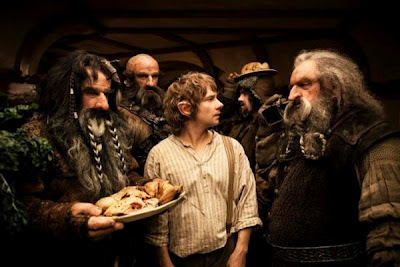 I know I’m probably the last person to comment on this, but I’ve just learned that Peter Jackson’s The Hobbit has gone from a two-part Lord of the Rings prequel to a full-on trilogy. I can’t say I’m surprised by this news – there’s money to be made in telling the story across three films – but I’m also concerned that the “unexpected journey” of Bilbo and his dwarven buddies just isn’t robust enough for a trilogy on the scale of The Lord of the Rings.

Jackson broke this news on his official Facebook page on Monday, confirming speculation that Warner Bros. and MGM were interested in a Hobbit trilogy. Quoting J.R.R. Tolkien himself, Jackson noted that The Hobbit is “a tale that grew in the telling.” Let’s hope it grew for the right reasons.
Posted at 2:22 PM
Email ThisBlogThis!Share to TwitterShare to FacebookShare to Pinterest
Labels: J.R.R. Tolkien, Peter Jackson, The Hobbit, The Lord of the Rings