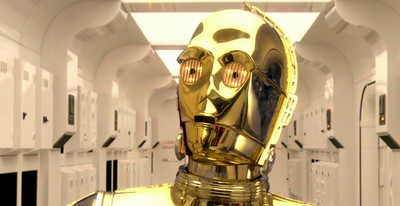 Disney’s plans for the Star Wars franchise could extend far beyond merely releasing three more installments of the core saga, according to The Hollywood Reporter.

We know that Toy Story 3 scribe Michael Arndt has been tapped to pen Star Wars Episode VII, while acclaimed screenwriter and producer Lawrence Kasdan (The Empire Strikes Back, Return of the Jedi) has signed on to return to the franchise. We also know that Simon Kinberg (Sherlock Holmes) has also been hired to write and produce a separate Star Wars film. With that, the assumption was that Kasdan and Kinberg would complete the sequel trilogy after Episode VII hits theaters in 2015. Yet, that isn’t necessarily the case.

Although Kasdan and Kinberg’s screenplays could become “Episodes” of the nine-part Star Wars saga, sources have told THR that the stories could also be transformed into spin-off Star Wars films that aren’t tethered to the main Skywalker story. Disney CEO Robert Iger has already expressed interest in releasing a new Star Wars film “every two to three years,” so it isn’t entirely out of the question that there are more than three new Star Wars films on the way. Neither Disney nor Lucasfilm has made any official confirmation as to the specifics of Kasdan and Kinberg’s screenplays, so please be sure to take this speculation with a grain of Kessel’s finest glitterstim. (Look it up.)

Releasing a new Star Wars film every couple of years is an ambitious endeavor, but I’ve always been open to side stories set in George Lucas’ expansive universe. This is probably why I read so many Star Wars novels of questionable quality in my youth. Read into that what you will.

For more on the future of the Star Wars saga, head over to HollywoodReporter.com.
Posted at 11:19 PM No comments:
Email ThisBlogThis!Share to TwitterShare to FacebookShare to Pinterest
Labels: Disney, Speculation, Star Wars

James Bond Will Return in ‘To Have and To Gold’

Hey guys. I’m not having the best week for a variety of reasons, but this video from Funny or Die cheered me up quite a bit. Check out the lost James Bond film To Have and To Gold, which was written directed and starring Gil Edmundberry.

In a move that will surely quell complaints about Disney’s impending resurrection of the Star Wars film series, Lucasfilm has announced that Toy Story 3 scribe Michael Arndt will write Star Wars: Episode VII.

Remember how the ending of Toy Story 3 got you all teary-eyed behind your 3D glasses? This is the guy you can thank for that. Arndt also previously won an Academy Award for Best Original Screenplay for penning Little Miss Sunshine.

If you’re not excited about this, you should be. For the latest updates as Episode VII pre-production begins, check out StarWars.com.

Posted at 5:51 PM No comments:
Email ThisBlogThis!Share to TwitterShare to FacebookShare to Pinterest

Just as he returned to don Indiana Jones’ trademark fedora in Kingdom of the Crystal Skull, 70-year-old actor Harrison Ford could once again choose to play rogue smuggler Han Solo in Star Wars: Episode VII, Entertainment Weekly reports. The Star Wars sequel, announced alongside news that Disney purchased Lucasfilm, will hit theaters in 2015 — more than three decades after Return of the Jedi premiered.

“Harrison is open to the idea of doing the movie and he’s upbeat about it, all three of them are,” an unnamed source told EW.com, referring also to Mark Hamill (Luke Skywalker) and Carrie Fisher (Princess Leia). What’s odd is that of the three main stars of the original trilogy, Ford has been the most vehement about distancing himself from the Star Wars franchise. What changed his mind?

It’s important to note that it is not yet known whether Episode VII will feature Luke, Leia and Han at all. Still, if this anonymous source is telling the truth, it’s nice to know Ford isn’t averse to the idea of becoming everyone’s favorite scruffy-looking nerf herder once again.

By the Power of Grayskull! I’m on He-Man.org! 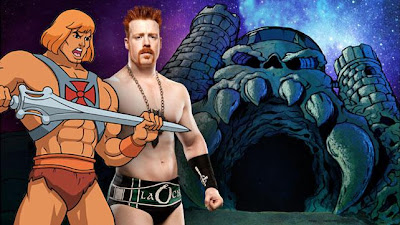 I normally don’t blog about work, but I couldn’t resist sharing that the kind folks at He-Man.org are now featuring a WWE.com story I wrote on their homepage. The piece includes interviews with WWE Superstars such as Sheamus, Wade Barrett, Dolph Ziggler and Intercontinental Champion Kofi Kingston talking about growing up with Mattel’s Masters of the Universe toys in honor of the brand’s 30th anniversary. Fun stuff, and it’s cool to get that kind of recognition from the MOTU fan community.

To read what the He-Man.org forums are saying about this MOTU/WWE crossover, click here.
Posted at 6:35 PM No comments:
Email ThisBlogThis!Share to TwitterShare to FacebookShare to Pinterest
Labels: He-Man, Masters of the Universe, WWE

My Thoughts on Disney’s Lucasfilm Purchase 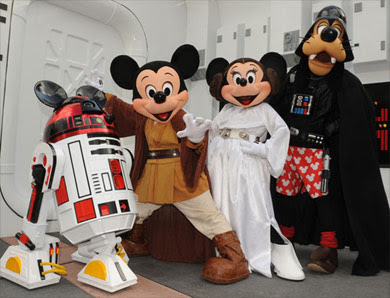 About a week ago in, well, this galaxy, the Internet was abuzz in reaction to shocking news that The Walt Disney Co. had purchased Lucasfilm, Ltd., for a whopping $4.05 billion dollars. As if that bombshell wasn’t enough to send the geek world into a tizzy, The House of Mouse revealed that it would be bringing Star Wars: Episode VII to theaters in 2015

This was a lot to process — especially considering the fact that many of us on the U.S. East Coast were dealing with the aftereffects of Hurricane Sandy, which left millions without power (myself included). Nevertheless, it seems as though just about everyone has an opinion about Disney’s latest acquisition, including the belief that Disney will forever tarnish the legacy of one of the film world’s most beloved properties. Will Mickey Mouse ruin Star Wars?

To answer that question, no. If the prequels didn’t ruin Star Wars forever, the franchise can withstand anything.

Jokes aside, though, I firmly believe that Disney’s purchase of Lucasfilm is the best thing to happen to George Lucas’ empire in more than a decade. The 68-year-old filmmaker’s decision to hand the keys to his kingdom over to the caretakers of the Magic Kingdom will no doubt allow for fresh, new creative minds to play in the sandbox the Flanneled One created nearly four decades ago. By essentially relinquishing control of the franchise and serving as “creative consultant” on this new trilogy of films, Lucas has ensured that Star Wars will live forever.

That’s the big thing that seemed to be lost on many people hearing this news last week: a new director (or directors) will helm the next Star Wars trilogy. When Episode VII hits theaters in 2015, we will witness the first-ever live-action Star Wars film directed by a fan. There’s an entire generation of talented directors that was weaned on the classic films, and all of them are surely anxious to take the Star Wars franchise into hyperspace. As we’ve seen with Dave Filoni’s work on the stellar animated Star Wars: The Clone Wars on Cartoon Network, modern Star Wars is at its best when fanboys are in charge.

But what about the other stories to be told in Lucas’ far, far away galaxy? Will we finally get that Star Wars live-action series we’ve been hearing about all these years? What about some traditional 2D Star Wars animation? Can we expect Han Solo and Chewbacca to join Woody and Buzz Lightyear in the next Toy Story film? We can only speculate on the future of Star Wars at this point, but I feel we can rest assured that it will be a bright one.
Posted at 6:10 PM No comments:
Email ThisBlogThis!Share to TwitterShare to FacebookShare to Pinterest
Labels: Disney, George Lucas, Lucasfilm, Star Wars
Newer Posts Older Posts Home
Subscribe to: Posts (Atom)