First Look at Bilbo Baggins in ‘The Desolation of Smaug’ 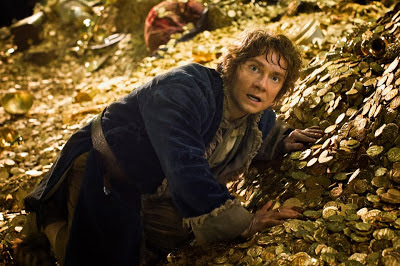 In a move that tells fans absolutely nothing we don’t already know about Peter Jackson’s next Hobbit film — but nevertheless sends us into a speculative frenzy — the trilogy’s official Facebook page released this first look at Martin Freeman’s Bilbo Baggins from The Hobbit: The Desolation of Smaug, slated to hit theaters Dec. 13, 2013.

In the photo, Bilbo is wearing some fancy new duds on a massive pile of gold, no doubt during his confrontation with the dragon Smaug within the Lonely Mountain. Bilbo could also be doing his Scrooge McDuck impression, but I don’t remember that from the book.
Posted at 3:42 PM
Email ThisBlogThis!Share to TwitterShare to FacebookShare to Pinterest
Labels: Bilbo Baggins, J.R.R. Tolkien, Martin Freeman, Peter Jackson, The Desolation of Smaug, The Hobbit
Newer Post Older Post Home