Is Harrison Ford Locked In for ‘Star Wars’ Sequels? 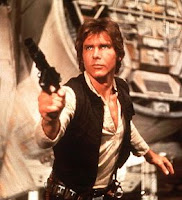 According to numerous reports, Harrison Ford will reprise the role of iconic rogue smuggler Han Solo in Disney’s forthcoming Star Wars sequel trilogy. This news was originally broken by Latino Review’s Umberto Gonzalez, who claimed in a Fox News Latino interview that “it’s official” that the 70-year-old actor will return to that galaxy far, far away to play our favorite scruffy-looking nerf-herder one last time.

Gonzalez cited “legitimate sources” in the interview, and states that the agreement locking Ford into the new Star Wars films is “significant” but did not offer any specifics. As such, we’d be wise to take this news with a massive grain of Corellian salt, but the fact that Entertainment Weekly’s Geoff Boucher later tweeted (@GeoffBoucher) that a deal is forthcoming but not yet finalized adds some necessary credence to this story. Stay tuned.
Posted at 12:47 PM
Email ThisBlogThis!Share to TwitterShare to FacebookShare to Pinterest
Labels: Han Solo, Harrison Ford, Latino Review, Star Wars
Newer Post Older Post Home