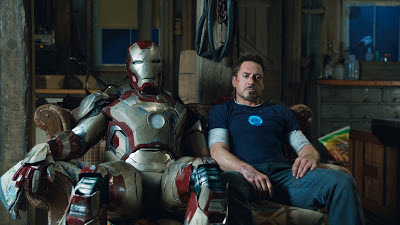 “It could have been worse.”

Seeing as how I’ve been eagerly anticipating Shane Black’s Iron Man 3 since the credits rolled during my first viewing of Marvel’s The Avengers, this was not how I expected to feel when I walked out of the theater in the early hours of May 3, 2013. Yet, in the aftermath of a film that seemingly wraps up the Iron Man story at least in terms of solo outings, I couldn’t help but experience a tinge of disappointment, marking the very first time I’ve been let down by a Marvel Studios film.

Now, Iron Man 3 isn’t a bad film by any means. Black (Kiss Kiss Bang Bang) took some calculated risks in crafting a film that had zero chance of providing the visceral crowd-pleasing thrills of Joss Whedon’s Avengers flick, and actually gave us the most ambitious Marvel Studios film to date at least from a storytelling perspective. Yet, in taking so many bold steps away from the comfortable conventions of the superhero genre, Iron Man 3 trips and stumbles more than once during its 130-minute running time.

So what’s Iron Man 3 about? Without giving too much away (I’ll let the rest of the Internet ruin the twists for you), Tony Stark (Robert Downey Jr.) is a mess after the events of The Avengers, which is pretty understandable. After all, saving New York City from thousands of invading aliens isn’t something you shrug off over time, even if you happen to be a billionaire industrialist/superhero. On top of his post-traumatic stress and frequent anxiety attacks, Tony must grapple with new threats, namely a terrorist calling himself The Mandarin (Ben Kingsley) and a series of bombings linked to a body-hacking technology called Extremis.

Iron Man 3 borrows heavily from Matt Fraction’s early run on The Invincible Iron Man and is loosely based on Warren Ellis’ acclaimed Extremis mini-series, but the film is seldom interested in honoring the source material. In fact, there are points at which Iron Man 3 actively trolls the core audience, resulting in the fan outrage typically reserved for Michael Bay films. Again, I won’t spoil any surprises, but at least one major Marvel villain is criminally marginalized.

One of Iron Man 3’s worst transgressions is the treatment of Stark as a character. Anxiety attacks aside, Tony has transformed from well-meaning but self-absorbed genius to absent-minded douchebag. At one key point in the film, Tony bafflingly puts his girlfriend Pepper Potts (Gwyneth Paltrow) at risk by revealing his home address to the worldwide media and goading The Mandarin into a showdown at his cliffside mansion in Malibu. When the bad guys send your house tumbling into the Pacific Ocean and nearly murder your girlfriend with a barrage of missiles, that’s on you, pal.

Downey is great as always, as are series regulars Paltrow and Don Cheadle, who gets a lot more to do this time around as Tony’s armored ally War Machine, rebranded by the government as "The Iron Patriot.” Kingsley shares villaining duties with Guy Pearce as Tony’s professional rival Aldrich Killian, while the lovely Rebecca Hall joins Paltrow in the mostly-male cast as Maya Hansen, creator of the Extremis technology and one of Tony’s former flings. Another standout in the cast is Ty Simpkin, who becomes Tony’s unexpected pre-teen sidekick for a sizable portion of the film. It takes some acting chops to trade sarcastic barbs with Downey while somehow sidestepping the whole “annoying kid sidekick” issue.

However, not even a strong cast and impressive performances all around could save Iron Man 3 from being an exoskeletal shell of a blockbuster — a schizophrenic and sometimes ponderous piece of popcorn cinema that doesn’t realize its true calling as an Iron Man sequel until the rousing CGI-fueled third act. For all the risks Black and writer Drew Pearce take, the end result just doesn’t come close to matching the passion or the energy that former Iron Man helmer Jon Favreau brought to the series in the previous installments.

Also noticeable are the massive plot holes in Iron Man 3, mostly because the previous films in this continuity seemed to go out of their way to acknowledge the other Marvel heavy hitters inhabiting the world. Where is S.H.I.E.L.D. when the U.S. president is in danger? Wouldn’t Captain America be working alongside The Iron Patriot to take down The Mandarin? Save for a few mentions of the other Avengers team members and a post-credits cameo by one of them, Iron Man 3 largely ignores the interconnectivity that makes the Marvel Cinematic Universe so unique. Also, anyone looking for hints about future Marvel Studios flicks — namely next summer’s Guardians of the Galaxy — will have to wait until Thor: The Dark World hits theaters this fall. There are none to be found in this movie.

Will you like Iron Man 3? You might, assuming you forget how much fun the groundbreaking 2008 original film and its and the flawed-but-enjoyable 2010 sequel were. However, if this is the final film in the Iron Man series, Tony Stark deserved a much better denouement than this.
Posted at 9:53 PM
Email ThisBlogThis!Share to TwitterShare to FacebookShare to Pinterest
Labels: Disney, Iron Man, Iron Man 3, Marvel Cinematic Universe, Marvel Studios, Shane Black
Newer Post Older Post Home