A 'Pivotal Meeting' to Take Place in 'X-Men: Days of Future Past,' Plus Jennifer Lawrence Bares All 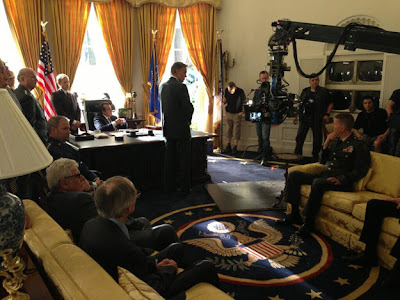 With all of the buzz surrounding Warner Bros.’ The Man of Steel and Marvel Studios’ upcoming releases, it’s easy to forget that Twentieth Century Fox is chugging along with its X-Men franchise. Later this summer we get The Wolverine — an apologetic sequel to the dismal X-Men Origins: Wolverine — and next year we get Bryan Singer’s X-Men: Days of Future Past. Singer’s return to the franchise, loosely based on the timeline-jumping comic book story arc of the same name, serves as a bridge between X-Men: First Class and the original trilogy.

In other words, the film intends rectify a muddied chronology. That’s X-Men for ya.

Earlier today, Bryan Singer tweeted out a photo from the set of the sequel, hinting at a “pivotal meeting” in the Oval Office involving Richard Nixon. I’m not a betting man, but I’m guessing the meeting could have something to do with the growing mutant menace. Fingers crossed for Sentinels, Nixon-style!

In related Days of Future Past news, Jennifer Lawrence was recently spotted exiting her trailer in her Mystique body suit and blue makeup, and although I can’t post the photos here, I would be doing you all a disservice if I didn’t point you in the right direction. Get an eyeful over at TMZ.
Posted at 10:54 PM
Email ThisBlogThis!Share to TwitterShare to FacebookShare to Pinterest
Labels: Bryan Singer, Jennifer Lawrence, Marvel, X-Men
Newer Post Older Post Home