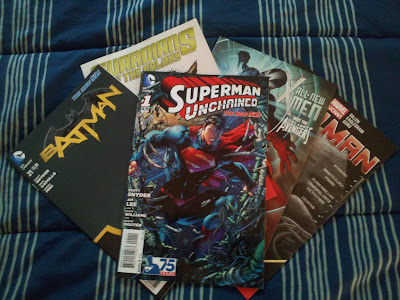 If you ventured into a comic book shop today, you already know that the big “must-buy” title released this week was the inaugural issue of Superman Unchained, DC’s attempt to make The Last Son of Krypton relevant in comics for the first time since the launch of The New 52. The new book, written by Scott Snyder with pencils by Jim Lee, is a pretty good read and a promising sign of things to come for our favorite red-and-blue boy scout. Plus, with the release of Man of Steel this Friday, the timing’s just about right. It’s funny how that worked out, ya know?

Here are some other titles I’ll be bagging and boarding this evening:
In related news, not only is a Man of Steel sequel confirmed, but scribe David S. Goyer is rumored to have begun work on a Justice League screenplay! Is Warner Bros. finally on track to bring us a fully realized DC cinematic universe?