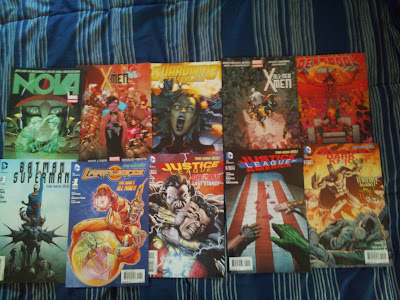 Damn, that’s a lot of books.

Despite the fact that I’ve been spending a lot less cash on comics these days, it was hard to resist parting with some greenbacks when I stepped into Stamford, Conn.’s A Timeless Journey this evening on the most nerdiest of occasions: New Comics Day. With the debut issues of DC’s Batman/Superman and Larfleeze hitting the racks along with the latest installments in Marvel’s hottest series, there’s a lot to be read, dissected and complained about on the Internet over the next few days.

Here’s what I snagged, bagged and boarded this week:
Speaking of things that make comic book geeks more excited than Wade Wilson in the back of a taco truck, Marvel has officially confirmed that Robert Downey Jr. will reprise the role of Tony Stark in the next two Avengers films! Concerns that Downey Jr. would abandon the armor after Iron Man 3 can officially be put to rest, making room for entirely new anxieties and rampant speculation about people from the funnybooks. Because that’s what we do.
Posted at 9:55 PM
Email ThisBlogThis!Share to TwitterShare to FacebookShare to Pinterest
Labels: Batman, Deadpool, Guardians of the Galaxy, Justice League, Justice League of America, Larfleeze, Superman, The Buy Pile, X-Men
Newer Post Older Post Home