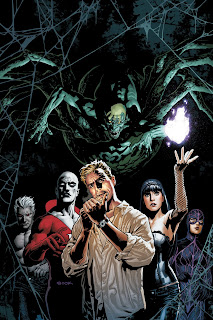 Although I really don’t think Warner Bros. should even consider a Justice League Dark film until they successfully pull off a proper Justice League movie, the latest news about Guillermo del Toro’s forthcoming project project starring John Constantine and his supernatural buddies is pretty promising.

The Hellboy and Pacific Rim director told MTV that the upcoming film will likely take place in the same universe as Zack Snyder’s Man of Steel, bringing DC and Warner Bros. that much closer to recreating the magic that Marvel Studios has enjoyed for the last five years.

“I think that the great thing about the Dark universe is that you have this possibility of basically creating this supernatural group, and you can play with different worlds, but I would love to see the DC Universe become as cohesive as the Marvel Universe," he told MTV. "So if there is any correlation I will honor it."