While rummaging through the pockets of my suitcase this weekend, I came across a sealed pack of 1989 Batman Topps trading cards, commemorating a magical time in pop culture when Jack Nicholson’s mug was plastered everywhere and kids around the globe were doing the Batdance or some horrifying variation thereof.

I picked up the pack for $2.00 during my trip to San Diego for Comic-Con International this year, a purchase fueled by that unique combination of nostalgia and “Why not?” that inspires approximately 95 percent of all SDCC decisions.

Before we dig into the pack, let’s check out the wrapper. 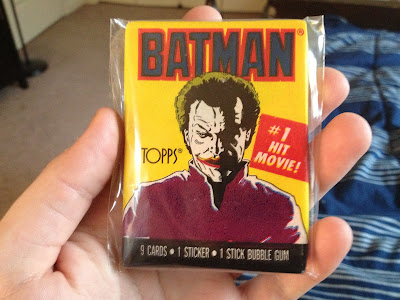 Featuring the words “#1 hit movie!” on the front, the package boldly predicts that not only will Tim Burton’s film resonate with audiences, but will reach the top of an unnamed ranking system. If I throw the words “#1 must-read blog” at the top of this page, maybe The Wort Report will finally net me one of those steak dinners I hear so much about.

As an aside, I kinda love the fact that the image of The Joker on the front of this wrapper shows Ol’ Jack Napier during that “oop, oop”  scene in Carl Grissom’s office, which makes me laugh uncontrollably every time I see it because haven’t we all been there? Just me then? Moving on. 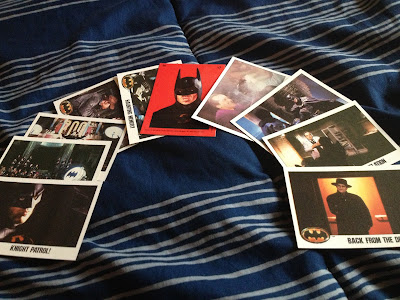 The cards are pretty standard given the time period, featuring movie stills coupled with captions that play fast and loose with punctuation marks. Here are my three favorites: 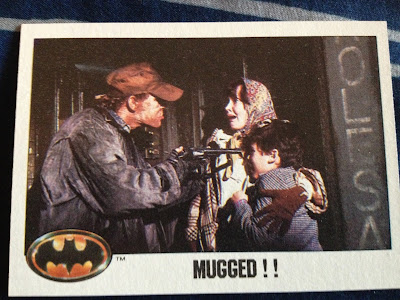 Two exclamation points! The card depicts a scene in which a dirty criminal preys upon a tourist family, showing us that Gotham City is a not-so-nice place to live. The description on the back says that the family “marches into the darkness” when they enter an alleyway, but I always thought is was more of a trot. I guess that’s why I don’t write trading cards. 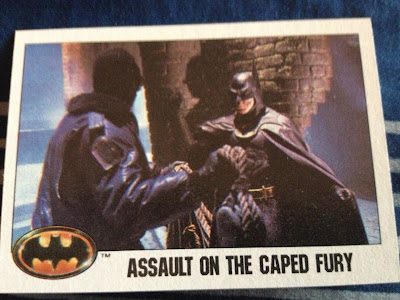 I’ve never heard Batman referred to as “The Caped Fury,” and I doubt that moniker will ever catch on in the DC Comics offices. However, it wouldn’t be the worst thing to come out of “The New 52.” 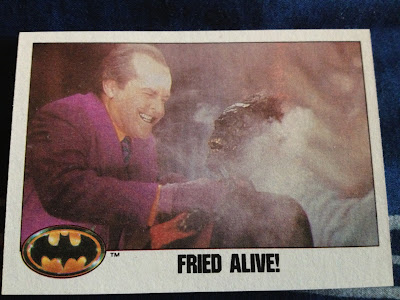 Ah, yes. I actually collected a number of these Batman trading cards before seeing the movie, and I remember this card scaring the crud out of me when I was younger. This nightmare-inducing card shows The Joker tightening the necktie of poor Antoine Rotelli, a Gotham City crimelord who had the misfortune of falling victim to The Joker’s electrifying joy-buzzer. Why this image only warranted one exclamation point in its caption is still a mystery to me. 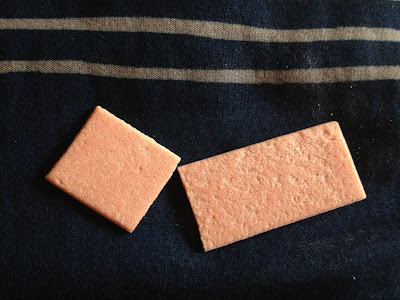 Along with a fairly bland sticker card featuring Michael Keaton’s Batman, the pack also includes a pink slab of gum, which has somehow maintained its original texture after 24 years. When I really want to slice up my teeth and gums, I know where to turn.