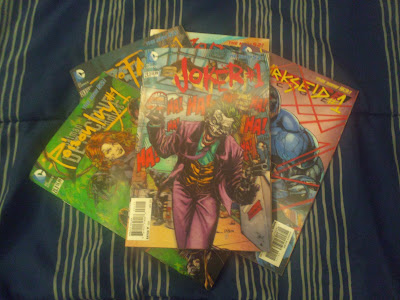 Creating the ultimate marketing ploy-within-a-marketing ploy scenario, DC’s “New 52” has unleashed “Villains Month,” in which the most evil antagonists in the DC Universe take over all of the publisher’s titles throughout September. The first of these books have hit the racks this week, rocking lenticular covers that harken back to 1990s gimmickry in the best/worst way.

I’m not above the allure of a cool presentation, and I picked up five of the new books fully expecting some solid “meh” behind the pretty, pretty 3D imagery. In that sense, I haven’t been too disappointed thus far. But hey, at least it’s gotten us talking about DC’s actual comics again, right guys and gals (but mostly guys)?