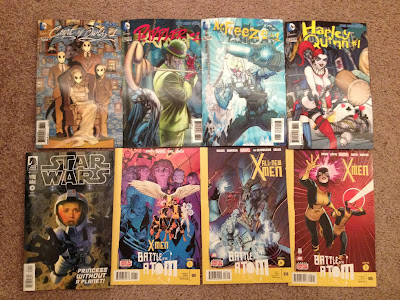 Another “New Comics Day” has come and gone, leaving us with a new assortment of DC’s “Villains Month” covers, complete with glorious lenticular razzle-dazzle. Based on the insanely negative press the publisher has been receiving as of late based on their refusal to allow Batwoman to marry her girlfriend and, well, this, perhaps placating fans with 3D imagery is DC’s strong suit for the moment. So … good for them?

On the plus side, Marvel’s X-Men: Battle of the Atom is off to a strong start, which is really saying something since X-Men crossover “events” can be head-slappingly, face-palmingly convoluted. I’m sure there will be plenty of time for that in the seven remaining installments, but let’s enjoy what we have thus far.

Speaking of enjoyment (worst transition ever, I know), but you likely got pretty excited that not only does the new Jurassic Park flick have a release date of June 12, 2015, but it’s got a title as well: Jurassic World. This leads me to believe that the Steven Spielberg-produced 3D film will be fairly large and ambitious in scope, which will give the series a necessary shot in the arm after two mostly-forgettable sequels. Or it’ll just be a lot of people running away from prehistoric monsters which is ... still pretty cool, regardless.