World Without a Batman: My Thoughts on 'Gotham' 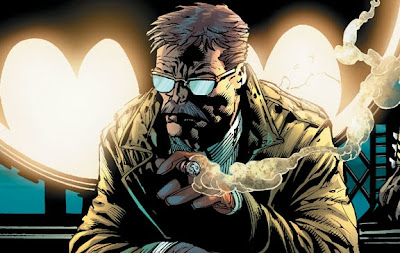 I’ll go on record in saying that I’m wholly unimpressed with DC Comics’ “Villains Month,” and I honestly can’t wait until the gimmickry has run its course. Yet, even though DC seems to be struggling in the printed storytelling department at the moment, the company is making some major strides on TV. On top of an ongoing Arrow series, Warner Bros. is prepping a Flash spinoff, a Constantine series and, most importantly, a series set in Batman’s stomping grounds called Gotham. As reported by the Los Angeles Times, the series will star a young James Gordon and will be set before The Caped Crusader prowled the city’s rooftops.

It remains doubtful whether Batman will actually appear in the series at some point, making Gotham more of a CSI-esque procedural drama set in the DC Universe. The reaction has been mixed: After all, wouldn’t prime-time viewers rather see Batman punch dudes in and around the face area? It worked in the ‘60s …

One might argue that Marvel’s Agents of S.H.I.E.L.D. has proven that a studio need not fill a genre TV series with franchise heavy hitters — The Avengers don’t appear on the show — yet it’s important to distinguish that Marvel Studios has been building an interconnected universe for the past five years, while DC Entertainment’s live-action stories are fragmented without anything resembling a shared mythology. Arrow’s Oliver Queen does not appear in the Dark Knight continuity, while Henry Cavill’s Superman will never visit Christopher Nolan’s vision of Gotham City. Green Lantern exists entirely on its own, which is perfect because that movie kinda sucked.

Meanwhile, I can be be totally cool with watching S.H.I.E.L.D. go on a mission without Iron Man, because I’ve witnessed Tony Stark existing in that universe elsewhere (in four previous movies, in fact). I’m observing a multi-tiered story from a different point of view, and it makes that world feel like an organic place. A Batman-less show disconnected from any pre-existing continuity robs us of that satisfaction because it isn’t part of something bigger. That’s what makes comic books so awesome: Our favorite heroes share the same expansive space ... assuming they share a publisher.

If Gotham somehow served as a bridge between Man of Steel and the upcoming Batman/Superman crossover, then we’re talking. The show would enrich the film universe, while moviegoers who followed the series would have a better understanding of where Bruce Wayne is coming from. Otherwise, it’s just an insular cop show that might or might not include Little Jimmy Gordon chasing down Clock King. I’m not sure I want that.