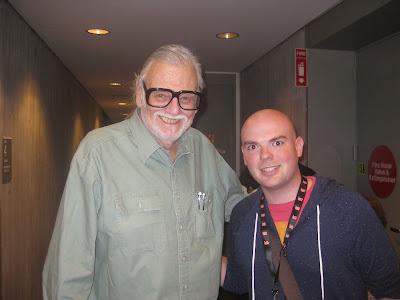 I usually try to avoid getting starstruck, but when I stumbled upon the opportunity to snap a photo with horror legend George A. Romero at New York Comic Con on Saturday, it was hard not to get a little bit jittery. The guy completely revolutionized a genre with 1968 zombie touchstone Night of the Living Dead and its sequel Dawn of the Dead, teaching a generation of filmmakers how combine blood-and-gore theatrics with social sensibilities. Romero also helped bring us Creepshow, which provided me with ample nightmare fuel growing up in New York thanks to WPIX’s “Shocktober” programming slate. So yeah, I was excited to meet him.

It’s difficult to describe exactly what it was like to have a chance encounter with someone like Romero, the czar of zombies, but I take solace in the fact that such moments still affect me as much as they do. Tonight, more than ever, I’m damn proud to be a geek.

Check out more photos from NYCC by following me on Twitter.
Posted at 12:16 AM
Email ThisBlogThis!Share to TwitterShare to FacebookShare to Pinterest
Labels: Creepshow, Dawn of the Dead, George A. Romero, Night of the Living Dead