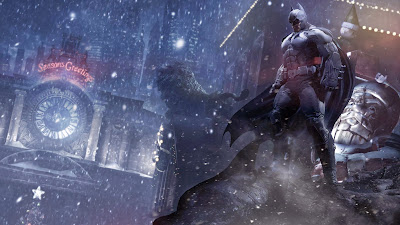 Just days after DC Comics announced they will be dressing Bane up like Batman because they’ve seemingly lost their minds, I finished up Batman: Arkham Origins, a title that might be one of the last great video games of the current console generation. It features the same game mechanics that made me obsessed with Arkham Asylum and Arkham Origins — both of which cemented The Caped Crusader as a bonafide video game star — and it has enough replay value to keep me hooked on side missions and repeat playthroughs for the foreseeable future.

New developer Warner Bros. Games Montréal ably steps in for the franchise’s previous developer Rocksteady Studios, crafting a Batman story that puts us into Bruce Wayne’s boots just two years into his career as Batman. The Dark Knight, at this point in the chronology, is viewed as a pseudo-myth by the populace of Gotham City, while the police force has yet to realize that Batman is their greatest ally in the fight against crime.

The entirety of the game takes place on Christmas Eve, when The Black Mask has placed a bounty on Batman’s head, drawing eight of the world’s most deadly assassins to Gotham City (including Bane, dressed appropriately). To keep these mercenaries from causing untold havoc on the city to draw him out, Batman instead takes the fight to them. Of course, through some twists and turns that I won’t spoil here, Batman ultimately finds himself face to makeup-smeared face with one of his most iconic adversaries for an epic series of confrontations that are no joke.

Okay, maybe they are. Because it’s The Joker. Although if that’s really a spoiler for you at this point, you probably deserve the heartbreak.

Aside from the yuletide setting that instantly reminded me of Tim Burton’s Batman Returns (one of my childhood favorites), I also really appreciated that Arkham Origins puts us in control of a Caped Crusader that doesn’t have all of the answers just yet. He makes mistakes, and has yet to earn the title of “The World’s Greatest Detective.” This portrayal of the character is far more interesting than his treatment in recent comics like Justice League, in which Batman is perceived as the most powerful guy in the room even when he’s sitting next to Superman. The Dark Knight’s humanity in the midst of chaos makes him interesting, and it’s always cool to see that brought to the surface whether it’s in comics, film, animation or, yes, video games.

Judging by Arkham Origins’ ending, this franchise can go in any number of directions — some of which might not even necessarily involve Batman — and I can’t wait to see what lies ahead. Even though my life doesn’t afford me much time for video games these days, this is one series that is consistently worth the investment.
Posted at 11:57 PM
Email ThisBlogThis!Share to TwitterShare to FacebookShare to Pinterest
Labels: Arkham Origins, Batman