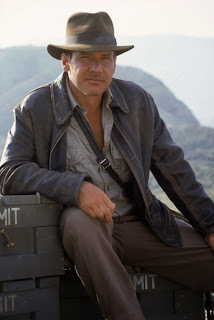 You knew it was coming. More than one year after Disney acquired Lucasfilm Ltd. and revealed plans to continue George Lucas’ Star Wars saga, The House of Mouse has secured the rights to market and distribute future films in the Indiana Jones series. Deadline.com reports that the original studio, Paramount Pictures, retains the rights to the original four Indiana Jones films, and will also be entitled to “financial rewards” for any future Indy flicks produced by Disney.

The big question is, does this mean Disney is actually interested in more sequels after Indiana Jones and the Kingdom of the Crystal Skull was savaged by critics and reviled by fans? Personally, I’d love to see Indiana Jones in an animated series of films, sparing us the indignity of seeing “tough guy” Shia LaBeouf in Mutt Williams and the Lost Opportunity.
Posted at 7:50 PM
Email ThisBlogThis!Share to TwitterShare to FacebookShare to Pinterest
Labels: Disney, Indiana Jones, Star Wars