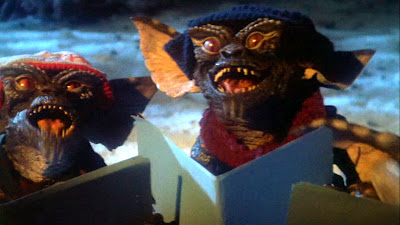 Merry Christmas, Wortmaniacs! If you’re like me, the holidays just aren’t complete without watching some classic Yuletide films. National Lampoon’s Christmas Vacation, A Christmas Story, Home Alone, The Nightmare Before Christmas, Scrooged, Bad Santa and Elf are required yearly viewing as far as I’m concerned, but many of the best Christmas flicks out there aren’t directly related to the holiday at all. Grab a glass of eggnog and peruse this handy (and non-paginated) list of my favorite Christmas movies that aren’t technically Christmas movies.

5) Trading Places (1983)
John Landis’ Trading Places, the story of a commodities broker (Dan Aykroyd) and a homeless man (Eddie Murphy) switching lives as part of a bet/social experiment, is a film that always makes me nostalgic for a time when Eddie Murphy was one of the funniest comedians around. The film takes place from Thanksgiving to New Year’s, and might be the only time we’ll ever get to see a Santa suit-clad Dan Aykroyd eating salmon on a bus.

4) Rocky IV (1985)
Leave it to ol’ Sly Stallone to cram the Cold War, Kenny Loggins, and a robot that sings “Happy Birthday” into an uber-patriotic Christmas package that’s worth opening early. Although Christmas has been a part of the Rocky series from the beginning, this film pitted the titular Italian Stallion against Ivan Drago (Dolph Lundgren) in Russia on Christmas Day. By defeating Drago and garnering respect from America’s enemies, Rocky Balboa taught us all how to love. And isn’t that what the holidays are all about? Guys? Hello?

3) Batman Returns (1992)
Between Lee Bermejo’s Batman: Noël, the Christmas setting of the Arkham Origins video game and just about everything in Tim Burton’s Batman Returns, The Dark Knight just might be a bigger Christmas icon than Frosty the Snowman. This 1992 sequel to Burton’s Batman kicks off with a villainous attack during a Gotham City tree-lighting and ends with The Penguin (Danny DeVito) hatching a twisted Christmas Eve plan to abduct and drown children. ‘Tis the season, amirite?

But most importantly, Batman Returns taught us one of the most important lessons of the season: No matter how delicious it looks, don’t eat mistletoe. It’ll probably kill you.

Office Christmas parties tend to get out of hand, but there’s usually a lot less shooting and explosions involved. John McTiernan’s classic Die Hard pits grizzled New York cop John McClane (Bruce Willis) against terrorists in a Los Angeles skyscraper on Christmas Eve. There’s little about the premise that screams “Santa,” but the film’s constant holiday allusions makes it a must-watch when the weather outside is frightful.

1) Gremlins (1984)
Christmas served as the backdrop for Joe Dante’s too-terrifying-for-children tale of a furry (and toyetic) holiday pet that spawns legions of mischievous monsters that terrorize a Norman Rockwell-esque small town. The chaos caused by these demonic green abominations is not all that dissimilar to what one might find at Target during the holidays, but at least no one in the film runs the risk of having their credit card information stolen. Zing!
Posted at 1:47 PM
Email ThisBlogThis!Share to TwitterShare to FacebookShare to Pinterest
Labels: Batman, Bruce Willis, Dan Aykroyd, Die Hard, Eddie Murphy, Gremlins, Rocky, Sylvester Stallone