‘The Hobbit: The Battle of the Five Armies’ Reviewed 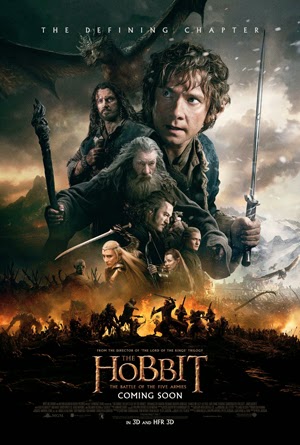 Remember how, in middle school, you used double-spacing and wider margins to stretch out your five-paragraph book report to the required three pages, thinking you were fooling your teacher? That’s pretty much what Peter Jackson has done — albeit on a far grander scale — in his Hobbit trilogy.

The third film in this bloated adaptation of J.R.R. Tolkien’s beloved children’s story picks up where The Desolation of Smaug left off, with the iconic fire drake laying waste to Lake-town and Bard the Bowman (Luke Evans) saving the day. But the dragon’s defeat only creates more problems for Bilbo Baggins (Martin Freeman) and the company of Thorin Oakenshield (Richard Armitage), as the titular armies converge on the Lonely Mountain for a massive showdown full of orcs, humans, elves, dwarves, trolls and a wide array of CGI beasts.

Since so much of the Hobbit story has already been told in the previous films — along with a whole lot of additional material added by Jackson to pad out the running time — there’s not much to this final film aside from large-scale battle sequences, but the moments that aren’t focused on fighting are largely forgettable. We see Thorin suffer from “dragon sickness” as the gold hoards within Erebor poison his mind, we see the White Council rescue Gandalf (Sir Ian McKellan) from Dol Guldur and we get more of the superfluous interspecies love story between Kili (Aidan Turner) and Tauriel (Evangeline Lilly). There’s also an abundance of scenes featuring a character named Alfrid Lickspittle (Ryan Gage), who’s just the worst ever.

The Battle of the Five Armies is a far more satisfying experience than the meandering Desolation of Smaug, but Jackson’s presumably final jaunt in Middle-earth too often feels like a video game cutscene. The battles lack the weight of those in the Lord of the Rings trilogy and are, unfortunately, lengthy to the point of exhaustion. Still, at a relatively brisk 144 minutes, it’s the most entertaining film in the trilogy.

As much as I loved the original Lord of the Rings films — I still have the light-up Burger King goblets to prove it — I can’t help but feel that there was a superior adaptation of The Hobbit in the works before someone got the idea that a three-hundred page children’s book needed to be a three-film, eight-hour war epic. I’d much rather see that movie.
Posted at 12:05 PM
Email ThisBlogThis!Share to TwitterShare to FacebookShare to Pinterest
Labels: Peter Jackson, The Battle of the Five Armies, The Hobbit, The Lord of the Rings