'Star Wars: Rogue One' Announced, 'Episode VIII' Gets a Director 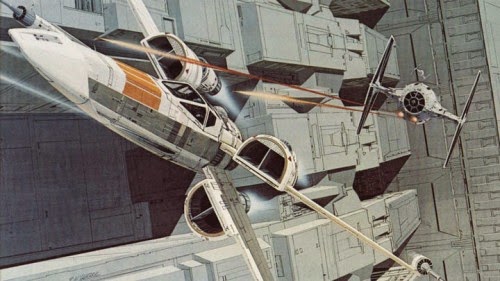 It was a big day for Disney. At a shareholder meeting in San Francisco, The House of Mouse not only announced a sequel to Frozen (ensuring that Elsa costumes will be en vogue among little girls for the foreseeable future), but dropped two huge bombshells for Star Wars geeks. The December 2016 Star Wars stand-alone film directed by Gareth Edwards will be called Rogue One, and Episode VIII, set for release the following May, will be written and directed by Rian Johnson, whose previous credits include Looper, The Brothers Bloom and three episodes of Breaking Bad.

It's exciting to see Episode VIII taking shape, but I'm most interested in Rogue One, which will star Felicity Jones (The Theory of Everything). Based on the title, it's easy to speculate that this will likely be a film about Rogue Squadron, the Rebel Alliance's elite squad of fighter pilots co-founded by Luke Skywalker. Could this film takes cues from Michael Stackpole and Aaron Allston's X-Wing series, showing us how the group evolved past the destruction of the second Death Star? Will it feature new characters, or established favorites like Wedge Antilles? What role will Jones play? We'll likely get more answers to such questions as Rogue One locks its S-foils into attack position and begins shooting in London this summer.

Even though I wasn't necessarily a fan of Edwards' take on Godzilla last year, I appreciated a lot of what it tried to do, especially from a visual standpoint. Let's hope Rogue One stays on target when it hits theaters Dec. 16, 2016.