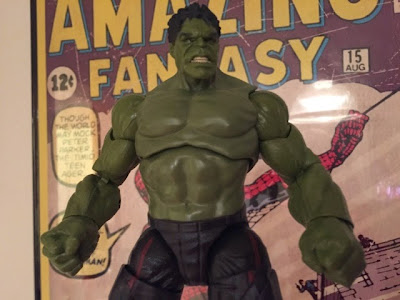 The Internet is going crazy after Joss Whedon quit Twitter amidst misguided criticism of his treatment of Black Widow in Avengers: Age of Ultron. Instead of getting wrapped up in all of that nonsense, however, I'd rather celebrate the awesomeness of the movie and its merchandise, namely the amazing Marvel Legends Avengers: Age of Ultron Hulk action figure from Hasbro.

This highly detailed rendition of everyone's favorite green rage monster is HUGE, practically bursting from its packaging, and it towers over many other figures in this line. Now I just need to pick up the rest of the figures in this series so I can assemble Thanos, because toy collecting is a neverending struggle. Oh, well.
Posted at 8:00 PM
Email ThisBlogThis!Share to TwitterShare to FacebookShare to Pinterest
Labels: Age of Ultron, Avengers, Hulk, Marvel Cinematic Universe