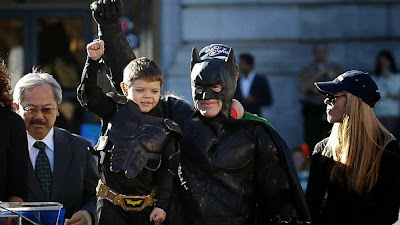 Wow. I don't think I was ready for this when I hit that "play" button. Back in 2013, a small boy with leaukemia, Miles Scott, was given the opportunity to save San Francisco from the forces of evil as "Batkid" thanks to Make-A-Wish and more than 25,000 good-hearted folks from the Bay Area and beyond.

Now, Miles' journey as a diminutive Dark Knight is chronicled in the forthcoming Warner Bros. documentary Batkid Begins, which opens in select cities on June 26. Watch the just-released trailer below.