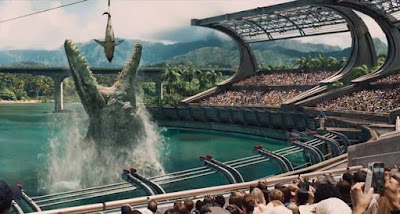 Ever since I saw Jurassic World on its second day of release, I’ve wanted to see it again. Not out of some kind of fanboy obligation, mind you, but because it so successfully made me feel like a kid again. I’ll be chasing that high for a long, long time.

I’m hardly alone in my rekindled obsession with Velociraptors, though. Guinness World Records has confirmed that the Colin Trevorrow-helmed resurrection of the Steven Spielberg franchise has become the fastest film to surpass the $1 billion mark in ticket sales, accomplishing that feat in just 13 days to crush Furious 7’s record of 17 days.

Since there’s just no stopping Jurassic World right now, it’s a safe bet that we haven’t seen the last of dino wrangler Chris Pratt and his prehistoric pals at the multiplex. More Mosasaurus, please!
Posted at 4:40 PM
Email ThisBlogThis!Share to TwitterShare to FacebookShare to Pinterest
Labels: Jurassic World