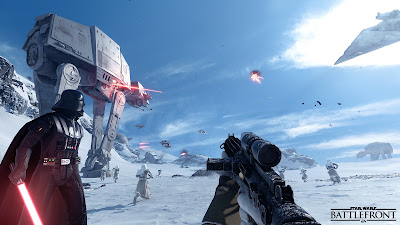 I downloaded the Beta immediately after work today, first jumping into a solo session of the Survival mode. In this instance, you're a Rebel soldier who's crashed on Tatooine, and you must survive six waves of enemies (including various types of Imperial Stormtrooper and AT-ST Walkers) before you're rescued. The full game will feature 15 waves of baddies. This mode didn't really give me much trouble in the Beta, and allowed me to get a feel of the game controls at a relatively leisurely pace. I learned how secondary weapons function, how to gain Obi-Wan Kenobi-favorable higher ground with the jetpack and that any mission seems more satisfying when a holographic Admiral Ackbar is cheering you on. No one can resist encouragement of that magnitude.

Next up was Drop Zone, a mode that charges a team of players with taking control of a series of escape pods before the other team can do the same. Whereas the Survival mode made me feel strong enough to pull ears off a gundark, Drop Zone made me feel like a jawa in a pick-up game of hoops against Chewbacca and his cousins. I'm apparently terrible at this mode, and not only did my team of sorta-stalwart Rebels lose, I left the game with a measly two kills to my credit. That being said, this game mode led me to fully appreciate Battlefront's all-out assault on the senses, making Star Wars fans and gamers alike feel like they're immersed in an important, large-scale conflict in that galaxy far, far away. This game is beautiful, and the volcanic surface of Sullust featured in this mode for the beta truly showcases what this title is capable of visually. Perhaps I played so terribly because I was in awe of my surroundings. Yeah, that's it.

Finally, I sampled Walker Assault, which took me to the icy planet of Hoth, replicating my favorite action sequence in any Star Wars film. In this mode, I slipped into the hood and armor of an Imperial Stormtrooper as I protected AT-AT Walkers from the retreating Rebels, who used relay stations to call in Y-wing air strikes to destroy the Empire's metallic monsters. In this mode, if the Empire keeps the Rebels from activating these relays long enough for one of your AT-ATs to reach the power generators, it's lights out for Luke and his pals. If the AT-ATs are destroyed then, well, the Empire strikes out. I really liked this mode (my Empire Strikes Back bias notwithstanding) because of the sheer number of players (this mode allows for 40 participants) and the variety of vehicles involved. I haven't even tried any of them yet, but the idea of stomping through the snow in an AT-AT and blasting Snowspeeders out of the sky is an exciting one. What does that say about me?

Walker Assault also features Luke Skywalker and Darth Vader as special characters, but whenever I encountered Luke, I ran in the opposite direction. I don't think I'm ready to tangle with a Jedi in this game quite yet.

Overall, the only disappointing thing about the Star Wars Battlefront Beta (available now through Oct. 12) is that it left me wanting more of everything, but I guess that's the point. It looks great, it controls smoothly, and it has a sweeping, cinematic presentation befitting the Star Wars universe. This is already shaping up to be among the best games of the current console generation.
Posted at 10:34 PM
Email ThisBlogThis!Share to TwitterShare to FacebookShare to Pinterest
Labels: EA Games, PC, Playstation 4, Star Wars Battlefront, Xbox One