New 'Star Wars' Footage Goes to the Dark Side

There's not a whole heck of a lot we know about the primary antagonist in Star Wars: The Force Awakens, but this new one-minute clip released today on Facebook gives us our best look at Kylo Ren yet, along with various scenes of our heroes in peril as they battle the First Order. Still no Luke Skywalker, though.

Posted at 10:28 PM No comments: Links to this post
Email ThisBlogThis!Share to TwitterShare to FacebookShare to Pinterest
Labels: Star Wars: The Force Awakens

A 'Captain America: Civil War' Trailer You Should be Thankful For

First off, Happy Thanksgiving! I hope you're all in the midst of a potato-induced carb coma. If not, you didn't Thanksgiving hard enough. Get on that.

Anyway, it takes a lot to get me excited about a movie that doesn't involve lightsabers this month, but Marvel Studios dropped a massive bombshell this week in the form of the first Captain America: Civil War trailer. It looks like it strays from the original comic book quite a bit, intermingling the comics' issue of government-mandated superhero registration with Cap's search for his ally-turned-nemesis Bucky, who vanished at the conclusion of The Winter Soldier. Although we still haven't seen any footage of Spider-Man, who's confirmed to appear in the threequel, this trailer does give us our first glimpse at Chadwick Boseman as Black Panther, among other awesome moments that should make the seemingly endless wait until the film's May 6 release date a tad more endurable. Just a tad.

Watch the trailer, make yourself a turkey sandwich and binge-watch some Jessica Jones on Netflix. You deserve it.
Posted at 9:06 PM No comments: Links to this post
Email ThisBlogThis!Share to TwitterShare to FacebookShare to Pinterest
Labels: Captain America: Civil War, Marvel Studios

'Star Wars: The Force Awakens' Gets a Rating 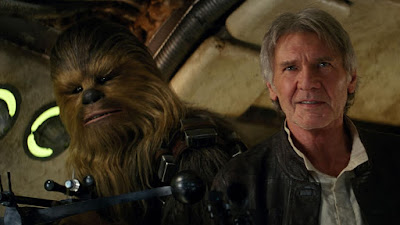 Star Wars: The Force Awakens, hitting theaters Dec. 18, will be rated PG-13 for "sci-fi action violence," according to FilmRatings.com. This makes the seventh film in the franchise the second consecutive installment to receive this rating, following Revenge of the Sith in 2005.

This seems about right. PG-13 seems to be the standard for big-budget action films these days, so I'm not going to presume that this means The Force Awakens will be any "darker" than previous films in the series. Plus, the PG-13 rating didn't even debut until 1984, after PG-rated Gremlins and Indiana Jones and the Temple of Doom horrified parents for their graphic content, so who's to say that The Empire Strikes Back or Return of the Jedi wouldn't have netted the the harsher rating if they were released later? It's not like amputations and accidental incest are "kid-friendly."


Posted at 8:29 PM No comments: Links to this post
Email ThisBlogThis!Share to TwitterShare to FacebookShare to Pinterest
Labels: Star Wars, The Force Awakens 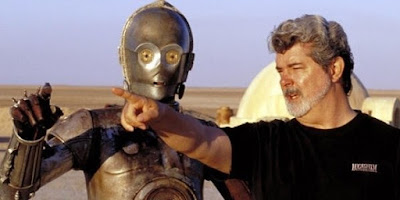 With all the frenzy surrounding Star Wars: The Force Awakens, hitting theaters Dec. 18, franchise creator George Lucas might be feeling a tad left out. After Disney reportedly scrapped his plans for a continuation of the Star Wars saga when The Mouse purchased the Lucasfilm empire in 2012, Lucas is, for the first time, watching the world get excited about his galaxy from the sidelines. However, in an interview with Vanity Fair, the groundbreaking filmmaker reveals that the backlash from the much-maligned prequels made his departure from his creation all too necessary.

"You go to make a movie and all you do is get criticized,” Lucas said in explaining why he needed to step away from Star Wars. “And it’s not much fun. You can’t experiment."

So was it the most vocal, disappointed fans that created a rift between Lucas and his most beloved creation? If so, should those critics be blamed or applauded? Regardless of how you feel about the prequels, those were Lucas' movies through and through. They were exactly the films he wanted to make, and represented his vision for the rise and fall of Anakin Skywalker. Having said that, it's unlikely that Star Wars would be where it is today if Disney hadn't revived the Star Wars brand and assured those innumerable prequel bashers that Jar Jar Binks and midi-chlorians were things of the past. As Luke, Han and Leia prepare for new adventures, it will be interesting to see if Lucas ever decides to return to that galaxy far, far away, and whether Star Wars warmly welcomes The Creator home.
Posted at 1:33 PM No comments: Links to this post
Email ThisBlogThis!Share to TwitterShare to FacebookShare to Pinterest
Labels: Star Wars, The Force Awakens
Newer Posts Older Posts Home
Subscribe to: Posts (Atom)