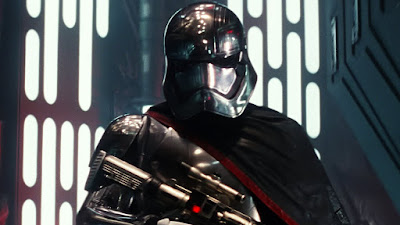 Even though the character did little in Star Wars: The Force Awakens and was unceremoniously dealt with off-screen, Captain Phasma will indeed be returning in Episode VIII. Actress Gwendoline Christie broke the news to People.com over the weekend.

I love Christie in Game of Thrones on HBO, so I was pretty disappointed that Phasma did little more than look cool during her limited screen time. Hopefully, this means that the metallic stormtrooper captain will have an expanded role in the next chapter of the Star Wars saga. I don't understand Christie's casting if that isn't the case.

For the full story, head over to People.com by clicking here.
Posted at 6:39 PM
Email ThisBlogThis!Share to TwitterShare to FacebookShare to Pinterest
Labels: Star Wars, Star Wars: The Force Awakens