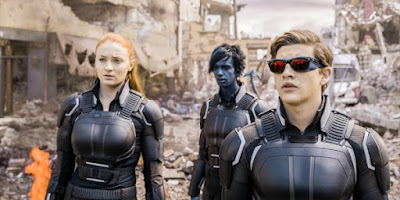 Since Bryan Singer's X-Men redefined the superhero movie genre in 2000, Marvel's mutant franchise has done it all. It's been great (X2: X-Men United), it's been horrible (X-Men Origins: Wolverine), it's been surprisingly fun (X-Men: Days of Future Past) and it's been delightfully filthy (Deadpool). With X-Men: Apocalypse, Singer gives us an experience that's something else entirely: It's a goofy and passably entertaining way to spend two hours and 27 minutes.

The flick is set in the 1980s after the events of Days of Future Past, which gave us an alternate timeline in which Mystique (Jennifer Lawrence) is a hero to mutantkind while Magneto (Michael Fassbender) has gone into hiding in Poland, where he has started a family. The emergence of an ancient mutant named En Sabah Nur, a.k.a. Apocalypse (Oscar Isaac) sets into motion events that lead to the creation of a new X-Men team that must combat Apocalypse and his Four Horsemen, saving humans and mutants alike.

Joining the returning Mystique, Professor Xavier (James McAvoy), Quicksilver (Evan Peters) and Beast (Nicholas Hoult) are Jean Grey (Sophie Turner), Cyclops (Tye Sheridan) and Nightcrawler (Kodi Smit-McPhee), all of whom play characters that appeared in the original X-Men trilogy. They're in their teens in this movie, evidently, and if you try to do the math on these characters' ages in this series or how any of this makes sense chronologically, your brain might start feeling like you just went four hours in Cerebro.

The bizarre thing about the X-Men franchise is that it's obsessed with filling in blanks, streamlining its continuity and attempting to fix inconsistencies on the fly (Days of Future Past did a lot of this). The problem is, the series isn't very good at any of that. Just how old is Mystique, anyway? If she and Xavier grew up as brother and sister, why do they seemingly not know each other in the original movies? Why does Xavier claim that Magneto helped him build Cerebro when it's already built by the time they meet? Why are there two Emma Frosts and two Trasks? We're asked to be invested in this mythology, which has been building for nearly two decades onscreen, but filmmakers, including Singer, can't even be bothered to fact-check their own work. That's probably why Singer wants us all to pull an Elsa with regard to continuity, urging us to "let it go."

This isn't just an issue of filmmakers choosing to handwave the "bad" movies in the series, either. For example, in X-Men: First Class, Wolverine says "Go f*** yourself" when Xavier attempts to recruit him, but in that film's sequel, he quotes Logan as saying, "f*** off." That's so easy to get right! Just watch the last movie and take notes! Perhaps that's why Deadpool is the most successful X-movie yet: It acknowledged that these movies are pretty much a mess at this point.

But a mess can be a lot of fun to watch, and I thoroughly enjoyed much of what Apocalypse had to offer. Quicksilver gives us another amazing "slow-motion" scene, there's an unexpected diversion involving the Weapon X program (and an obligatory cameo from You Know Who) and the final battle is a total blast. Whether you'll care about what happened 20 minutes after the end credits is another story entirely, but you probably won't regret the time you spent with these characters. It's nowhere near as good as Captain America: Civil War, but you also shouldn't expect it to be.

Judging the movie on its own merits, though, there are some issues unrelated to my obsession with franchise continuity. Based on her performance, Lawrence doesn't seem to be all that interested in playing Mystique anymore, which is unfortunate since she's basically the protagonist of this new wave of X-Men movies. Equally unfortunate is the execution of Apocalypse and his Four Horsemen. Isaac does just fine with the material, but I could never shake the feeling that I was watching Ivan Ooze from Might Morphin' Power Rangers: The Movie, still hatin' on super-powered teenagers. This version of Apocalypse just isn't menacing, and the character design has a lot to do with it. As for his henchpeople, I feel like these new versions of Psylocke (Olivia Munn), Storm (Alexandra Shipp) and Angel (Ben Hardy), were pretty much wasted here. Maybe they'll have more to do in the next film, which will position them all as Xavier's former college roommates and longtime friends. Because consistency is for dweebs, after all.