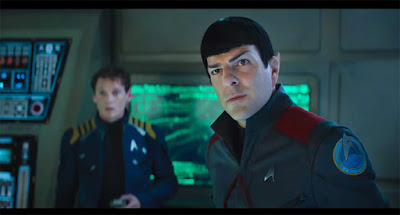 Star Trek Beyond isn't the return to form purists might have hoped for from sci-fi's landmark, half-century old property, but it also isn't the dull, loud, explosion-laden popcorn flick the trailers might have had you believe. Yes, there are explosions ... and yes, this is absolutely a turn-of-your-brain popcorn flick. And boy, is it ever loud. But dull? Hardly. In fact, after 2013's dreary Star Trek Into Darkness, I daresay that this film, helmed by Fast and the Furious veteran director Justin Lin, captures the sense of adventure established by J.J. Abrams' 2009 Trek reboot that was strangely missing last time around.

In Beyond, James T. Kirk is approaching his thirtieth birthday and a potential promotion to vice admiral, a job move that would remove him from the captain's chair of the iconic U.S.S. Enterprise. Before he can break the news to Commander Spock (Zachary Quinto), the crew is presented with a dangerous rescue mission that will hurl them into uncharted space and put them face-to-face with the villainous Krall (Idris Elba), who has a longstanding vendetta against the United Federation of Planets and seeks to use a superweapon against it. Scattered, wounded and stranded on a mysterious alien world, Kirk, Spock, Lt. Uhura (Zoe Saldana), Dr. "Bones" McCoy (Karl Urban), Chekov (the late Anton Yelchin), Sulu (John Cho) and Scotty (Simon Pegg) team up with mysterious asskicker Jaylah (Sofia Boutella) to take down Krall and get home.

Although I have a fondness for the original 1960s Star Trek series, I could never get into The Next Generation growing up, largely because I felt like its tendency to favor extended, jargon-laced sequences aboard the Enterprise was keeping us from all of the more exciting things happening outside of the ship. Granted, the reuse of the same sets probably served a budgetary purpose at the time, but for a child looking for Star Wars-style shootouts and cool alien species, I was never quite satisfied. Perhaps the reason why I dig these new Trek films so much is that they're essentially Star Wars flicks in Star Trek Halloween costumes (funny how that all worked out for Abrams). Still, fun is fun, and with its mix of snappy dialog, exotic aliens and intense action set pieces, Beyond might be one of this summer's sleeper hits.

Below are some of my scattered Star Trek Beyond thoughts and observations. If you don't want spoilers, here's where you should stop reading.

My verdict? Look, as far as franchises that begin with the word "Star" go, you already know where my loyalties ultimately lie. That being said, this rebooted timeline has gotten me more interested in Trek than I've ever been before, and Beyond is a much better sequel than Into Darkness. If you're considering checking it out in theaters, you should definitely go ... boldly.
Posted at 9:18 PM
Email ThisBlogThis!Share to TwitterShare to FacebookShare to Pinterest
Labels: Star Trek Beyond. Star Trek