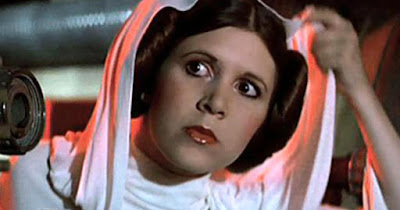 The galaxy is missing its princess today.

Weirdly enough, when I learned that Carrie Fisher had passed away at the age of 60 following a heart attack, I was en route to my fourth viewing of Rogue One: A Star Wars Story. During the final moments of the film, I could hardly hold back the tears welling underneath my 3D glasses.

I fell in love with Star Wars and Fisher's snarky, no-nonsense and, unbeknownst to me at the time, groundbreaking portrayal of Princess Leia Organa when I was just three years old. The Empire Strikes Back was my first film from the saga, weirdly enough, and I was introduced to Leia as a take-charge leader of the Rebel Alliance who was just as strong as and often smarter than her male counterparts. She was the only woman that could match wits with Han Solo, and when she had orders to evacuate the Rebel base on Hoth, everyone listened.

I saw A New Hope and Return of the Jedi later on, and even though she was captured and required saving in both of those films, Leia never played the "damsel in distress" role that was commonplace in the sci-fi/fantasy genre at the time. She routinely mouthed off to her captors and even saved her saviors in the 1977 original film, and in Return of the Jedi, the enslaved princess choked out the vile, slug-like Jabba the Hutt with the chain around her own neck. If that's not feminist symbolism, I don't know what is.

As was likely the case with many young, male Star Wars fans at the time, Leia was the ideal female companion, not because she was beautiful (and let's be real, Carrie Fisher was a knockout), but because she wasn't as helpless as the other princesses out there in pop culture. As for the girls, she was aspirational, and being Leia while playing Star Wars in the backyard meant you could blast Imperial Stormtroopers just like the boys.

More than a childhood icon, Fisher was a brilliant writer, a beacon of mental health advocacy and a refreshingly candid personality who never shied away from poking fun at herself and her bizarre career. Based on the incredibly outpouring of emotion on my social media feeds, she touched countless lives in unexpected ways.

The universe loved her. I hope she knew.

Oh its painful news.I also came to know today through your post.She was such a elegant and talented person.Your blog is so nice.I liked your writing.Thanks and keep writing.