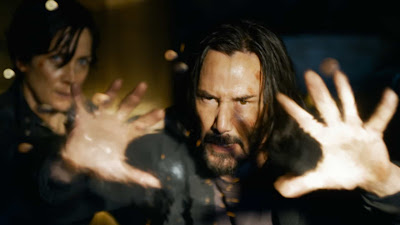 Neo and Trinity both died in the final installment of the original Matrix trilogy nearly two decades ago, but that doesn’t stop Keanu Reeves and Carrie-Ann Moss from reprising these iconic roles in The Matrix: Resurrections, hitting theaters and HBO Max Dec. 22.

Obviously one can assume based on the title of the film that the characters’ re-emergence is central to the plot. But if you’re looking for concrete info on what the fourth installment of the groundbreaking sci-fi franchise is truly about based on the new trailer that just dropped, you’ll have to follow the white rabbit a bit further down the rabbit hole.

We meet a scraggly-haired Thomas Anderson/Neo who seems to have scattered visions of his prior life. We see him undergo psychoanalysis from a character played by Neal Patrick Harris. Priyanka Chopra’s character seems not unlike The Oracle of the prior trilogy while Yahya Abdul-Mateen II plays a mentor not dissimilar to Laurence Fishburne’s Morpheus. The familiar mixes with the new as imagery of blue pills, red pills, human batteries, at least one black cat and the franchise’s signature martial-arts choreography fill the frame. Jefferson Airplane’s “White Rabbit” plays because, you know, Alice in Wonderland. It all looks slick and promising, giving hope to fans who have been clamoring for a fourth film for a long time now.

I loved the original film, but was underwhelmed by The Matrix: Reloaded and The Matrix: Revolutions, both of which seemed to buckle under the weight of their exhausting digital/social/theological philosophizing. Now that we’re living in an age ruled by smartphones and the urge to be constantly “plugged in,” I’m curious to see how director Lana Wachowski modernizes and expands on the Matrix universe when Resurrections drops this Christmas.

Until then, check out (and endlessly dissect) the trailer below!

Posted at 11:26 AM No comments:
Email ThisBlogThis!Share to TwitterShare to FacebookShare to Pinterest
Labels: The Matrix, The Matrix: Resurrections

It’s been seven years since I’ve posted anything on The Wort Report’s YouTube channel – my sole post was a Guardians of the Galaxy Hasbro Marvel Legends Groot Build-A-Figure video that garnered a whopping 59 views – but when you stumble upon sealed packs of vintage Marvel Universe trading cards during a chance trip to Rhinebeck, New York, you simply can’t resist the urge to create content out of the situation.

Thanks to an impulse purchase from the fine folks at Megabrain Comics & Arcade, I obtained a small collection of Marvel Universe Series 3 from Skybox. And with powerful pulls like The Watcher, Galactus and the Infinity Gauntlet itself, that Thanos chump’s got nothing on James Wortman. Check out the video above!

It’s here. Following an ultra-low quality “leak” over the weekend, we finally have the official first trailer for Spider-Man: No Way Home, the third Spidey flick in the Marvel Cinematic Universe that promises to crack the MCU Multiverse wide open.
For True Believers, there’s plenty to digest in the 3:03 clip (which also accounts for a PlayStation 5 end tag. After Mysterio outed him as Spider-Man in Far from Home, The Wall-Crawler’s world is thrown completely out of whack. Enter Doctor Strange, who bends some space/time rules despite the warnings of others (sorry, Wong) to make everyone forget who Spider-Man is. Mistakes are made, and villains from other realities – it seems – invade the MCU. Enter Alfred Molina’s Doctor Octopus (“Hello, Peter”) and Willem Dafoe’s Green Goblin, who can be heard cackling offscreen as we see his signature pumpkin bomb explode. Yellow lightning evidently heralds the arrival of Electro, with Jamie Foxx confirmed to be reprising his Amazing Spider-Man 2 role as the zap-happy bad guy.
Whether or not these are the same versions of the villains we have seen in prior Sony Spider-Man films remains to be seen. After all, (spoiler alert) they’re pretty dead by all accounts. But as we’ve seen in comic books and the MCU itself as of late, death is more a suggestion than anything else when it comes to these characters.
And speaking of those prior Sony Spidey films, the trailer doesn’t so much as hint at the appearance of prior celluloid Webslingers Tobey Maguire and Andrew Garfield, both of whom are heavily rumored to appear in the film. Of course, this is outrageous to the most vocally venomous denizens of social media. For the rest of us, it’s welcome restraint. If they do appear in the film, their big reveal will be powerful. And as Uncle Ben says, great power something something.
As for me, I have a deep connection to the prior Sony films – specifically the Sam Raimi trilogy. I’ll never forget seeing the 2002 film with my friends during opening weekend, which was one of our last moviegoing experiences before high school graduation. Spider-Man 2 just two years later was one of the first things I wrote about for UConn’s Daily Campus newspaper. My high school marching band appeared in Spider-Man 3, which I covered for the Westmore News in Port Chester. I have more action figures of Spider-Man than perhaps any other character in my collection, most of which are likely from the films. So yeah, this means a lot to me, and I’m glad to see the Raimi films and the largely underrated Amazing films canonized in the current storytelling in such a fun way.
Plus, there’s some fun comic history being remixed here. The storyline of No Way Home seems to be a mash-up of the “One More Day” and “Spider-Verse” arcs, both of which had long-reaching implication for Peter and his supporting cast. Although it would be unfair to pit this one against the phenomenal Spider-Man: Into the Spider-Verse animated film, No Way Home has the potential to similarly web up our imaginations when it arrives on December 17.
Posted at 4:10 PM No comments:
Email ThisBlogThis!Share to TwitterShare to FacebookShare to Pinterest
Labels: Marvel Cinematic Universe, Spider-Man 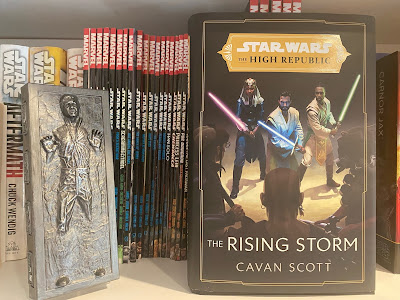 We’ve officially entered phase two of Lucasfilm’s Star Wars: The High Republic publishing initiative, taking readers through an era of appropriately high adventure set 200 years before The Skywalker Saga and featuring a slew of new Jedi characters and just a few we’re used to, including a slightly-less-aged Master Yoda and long-necked Jedi Council member Yarael Poof, easily one of the most unusual character designs of the prequels and a personal favorite of mine.

But the High Republic era isn’t overly concerned with the familiar. From malicious, man-eating killer plants to hyperspace-defying space travel, there are many new concepts to explore for even the most Force-adept readers, and that feeling of freshness is doubly palpable in the spectacular second adult novel in the series, The Rising Storm by Cavan Scott.

Scott, who also pens the High Republic Marvel comic books, builds on the relationships and key conflicts established in Charles Soule’s Light of the Jedi, which was released earlier this year and features the heroic Avar Kriss uniting the Jedi against a cataclysmic event known as The Great Disaster. In The Rising Storm, Kriss is occupied elsewhere dealing with those aforementioned killer plants – the Drengir, chief antagonists of the Marvel series – allowing the conflicted Jedi Elzar Mann to take the spotlight along with Padawan Bell Zettifar, Jedi High Council Member Stellan Gios and my personal favorite, the not-quite-Jedi monster hunter Ty Yorrick. As Supreme Chancellor Lina Soh plans a landmark Republic Fair to celebrate and promote unity throughout the galaxy, the sinister Marchion Ro and the bloodthirsty Nihil plot to crash her party and throw the Republic into disarray. The Jedi respond to this threat with lightsabers in hand and the Force as their ally, although some of these heroes are forever changed by the battle.

The Rising Storm is intense, especially in its rollercoaster of a third act. The heroes are tested physically and psychologically as the Nihil push them to their limits and, in at least one case, to the shadow of the Dark Side. It all leads to a heart-wrenching final chapter that hints at disturbing times ahead in that galaxy far, far away.

The High Republic lineup spans adult novels, young adult fiction, children’s books and comics, so there’s a lot to experience if you’d like to immerse yourself in this new era of Star Wars storytelling. Otherwise, I’d strongly recommend Light of the Jedi and The Rising Storm to get caught up on the locations and characters. And you’ll be glad you did. Although there are dark times ahead for The High Republic, the future of this era looks bright.